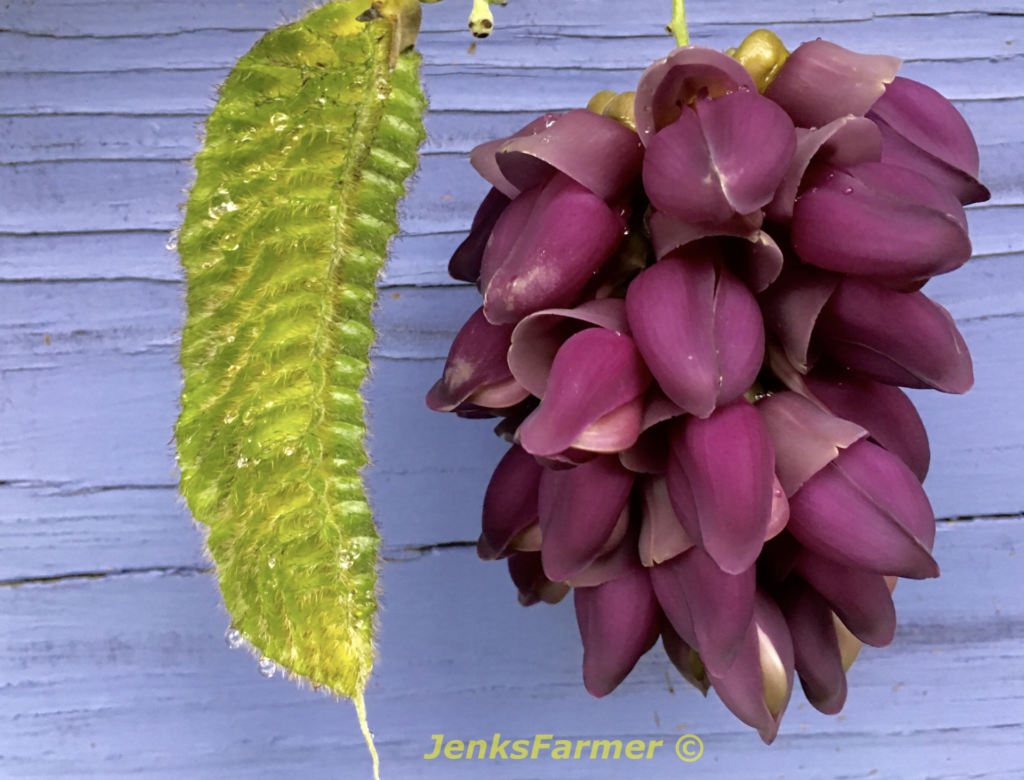 The executive breakroom for our company is done up in luxurious, purple. From the walls, rails, and ceiling, purple flowers drip. Not the cheapo, fake wisteria kind you’d see dripping in a Greek restaurant either. Curvaceous, velvety flowers literally drop onto your head sometimes. This breakroom, where lots of deep conversations, strategizing, and team and personal revelations happen, is really a tiny deck off the office door of my house. The elaborate ‘ceiling’ consists of the stunning, rare, tough-as-nails Purple Jade Vine.

This ‘room’ feels secluded. The vine walls protect our chairs, a bamboo arch hides the street, the vine canopy shades us from summer sun. Being a city house, there’s a nearby hedge and close neighbors too. Being 2020, this house in a progressive, we-grow-our-food part of town, it’s neighbor Joe’s girls who eavesdrop through the hedge. I mean the neighbor’s hens. They scratch around, making inquisitive little ‘bok?, baok?, booaack?’ We joke, ‘those girls stand around the corner hoping to get the scoop on our upcoming plant of the year.’  Young gardener Sam jokes about the corporate breakroom thing too as he steps toward the hedge to take a leak.

Over the years, many young gardeners gathered here for work planning, plant talking, and beer sipping.  One young woman dedicated herself to going away for a Ph.D. One left to grow pot in Colorado. Sam is special. If you saw a picture of a college sports team, you’d zoom in on Sam.  His three-day blond stubble and reddish curls frame sparkling eyes and a sweet smile. You’d think, this guy must be the leader of many wild adventures that could, but never do, go wrong. Or he’s the team captain who even on a losing game gets everyone cheering.

But Sam is none of those things. He’s introspective. He knits. He shyly suggests a new radio station, “You probably won’t like it. But it inspired me. Can I plug it in?”  Sam doesn’t believe in Bluetooth. One afternoon, he does something that’s totally typical of this understated young man. Facing away from me, into that vine that covers the deck and drops purple flowers,  Sam says,

‘Hey look at this.’ I pay attention. I saddle up to him slowly and peer into the kudzu tangle.

When I see it I hold my excitement, for his sake, and try to be as cool as Sam. I fail. My eyes open wide, my mouth opens wide,

‘Jesus-Elvis! How did you find that?  How long has it been there? Sam!’

“A few weeks ago, I crunched open one of the flowers with my fingers. You need some finger strength to pop them. I liked how it felt. So I did it again. Again. And I noticed pollen going from one to another. So I’ve been watching this seed form. I pollinated it. I’ve been wondering, what in the world could do that in the wild? Not a butterfly or a bee. Something strong. Seems like this vine doesn’t want to make many seed.”

He’s right. In all the decades since I hauled this rare vine back from a mentor’s garden in Texas, I’ve never gotten a seed. I’d tried the regular ways of hand pollination, tiny paintbrushes and all. Then Sam, being all quiet and cool, fingered some flowers and figured out the secret. Grasp the balloon flower and squeeze hard between thumb and forefinger. Pollen pops out. Shake. Squeeze.  Move on. Do it again to another one. Sam. Of whom a new, art collectors client said to me, ‘We’re thrilled to meet Sam. We’ve never met an intelligent redneck. When we moved down here from Connecticut, we assumed they’d be here, we just have run into them. You know, not at Temple.”

As rare and beautiful as a man like Sam, as scarce and inspiring as a Jewish art collector in rural South Carolina, is this vine, Mucuna cyclocarpa. Only one or two US nurseries grow it. Purple Jade Vine, seduced plant collectors for decades with exotic flowers.  But even underground parts intrigue botany geeks. Black-skinned tubers, like thigh-thick sweet potatoes, reach deep in the soil. From those, new stems shoot up fast each March. Thick and flexible as the flag pole on a child’s bike, by Mother’s Day, a canopy of broad leaves cover the deck. Then the purple magic. Wisteria-shaped flowers stack on top of one another, in powerful, Roman Emperor purple. Prince should have grown it

A mentor, John Fairy, passed this plant on to me way back in the 90s. I’d gone to the dry Texas woods to visit his renowned garden. He asked me to spend the weekend. Confirmed bachelor, an erudite professor of architecture, John tsked me when I started to put my suitcase down on a bedside table, “That table is Nogochi. We admire it. We don’t put things on it. I’ll tell you about my old friend Nogochi later.”  His garden intrigued me more. Rare and exacting as sparse Japanese furniture but overflowing with exotic plants. By the end of my visit, he must have seen some spark of intelligence, as he shared lessons and treasured plants. Plants that I’d cherish, share and even write about, for decades.

Jade Vine requires patience. Once Sam collected seeds, we had to learn how to germinate them. Years of tests led to this system; once the hairy pods dry, put them on asphalt street and stomp on them with a heavy boot. Pick the hard beans out of the spiny detritus. Even this doesn’t break the shell enough though. Next, hold each seed on a power sander till you see a bit of green or white through the black seed coat. Soak for 24 hours. Refresh the water once or twice. Sow an inch deep, in warm soil.

For such a vigorous vine and tough seed, Mucuna starts off life in a fragile state. About a month after sown, thread-thin stems extend a foot or more before putting on a leaf. Even after a few months, the stems remain vulnerable. If you break one off, the entire plant dies. But nurse it through the first year you’ll have shade every summer. Our 25-year-old plant tries to climb out and cover the clothesline now.

As surprising as the fragility of young plants, is the delicacy of this dense canopy. There’s no need to construct a sturdy pergola. I’ve found the best way to guide the vine is a simple net of strings. We have two poles on the corner of the deck. I tie nylon string between them. As the vine grows through summer, I tack more strings over the deck. Mucuna weaves a green ceiling and purple flowers hang down.

Now, years after Sam has moved on, when I step out to talk on the phone, I automatically reach up to the flowers. I pop and pollinate. It’s more satisfying than popping bubble wrap. Sometimes I flick a green seed over to the girls. Every time I step into the purple haze breakroom, I think of John who passed the vine to me.

Out in the dry hills of a Chinese forest, a bat bites a purple Mucuna flower, squeezes, shakes, rubs its bat whiskers with pollen grains, and moves on. Pollination. In the wild, the relationship between bats and flowers is a matter of species’ survival. We don’t even know what the bat gets out of the process. Here, in the garden world, in our world, relationships matter too, this plant, this story connects exacting old John, who died a few years ago, to inquisitive young Sam, who figured out how to pass it on to you. 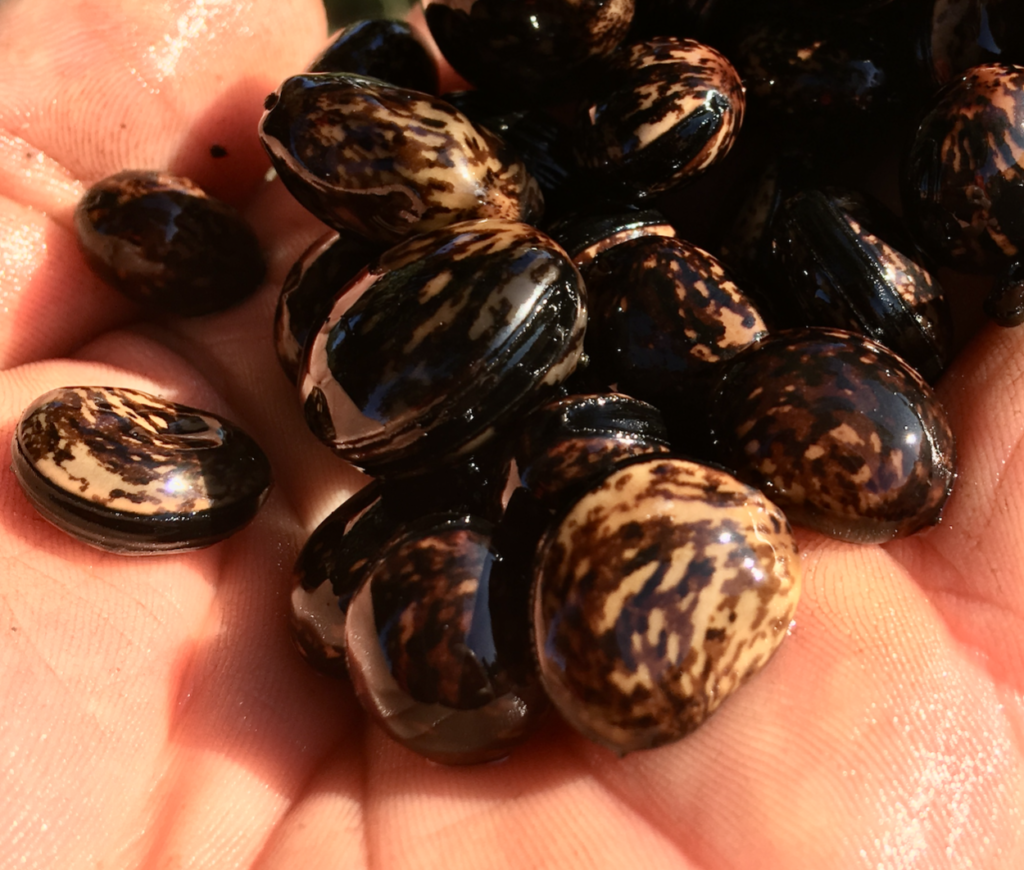 Seeds need to be sacrificed with sandpaper