These are just a few of the media sources in which we have been mentioned: Oct. 2012 Southern Living, Garden and Gun and Hobby Farm Home, Country Living’s Perennials, The Dallas Morning News, and The New York Times.

[Not a valid template]

Television
We’ve been featured in an international commercial for John Deere. We’ve also been on national gardening shows, such as Cultivating Life, and also the local show, Making It Grow. One segment with Jenks won a 2012 Telly Award.

Radio
Jenks is a frequent guest on Felder Rushing Gestalt Gardener (Mississippi Public Radio), and Your Day (SC Public Radio). Tom and Jenks have been featured on South Carolina Business Review, as well.

Web
Jenks Farmer, Plantsman has made it on Dave’s Garden Watchdog. 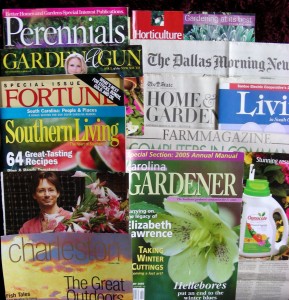 Jenks was recently appointed to the American Horticultural Society’s Book Award committee for a three-year term.  He will join six other horticultural professionals across the county, including  University of Washington, Miller Horticultural librarian Brian Thompson, in reviewing and presenting awards to the authors and publishers of the best North American books on gardening from the last year.

Review copies of the books considered for this award will be added to the local library collection after the committee completes its work in early 2017.  The awards will be announced in the March/April issue of The American Gardener, the magazine of the American Horticultural Society.