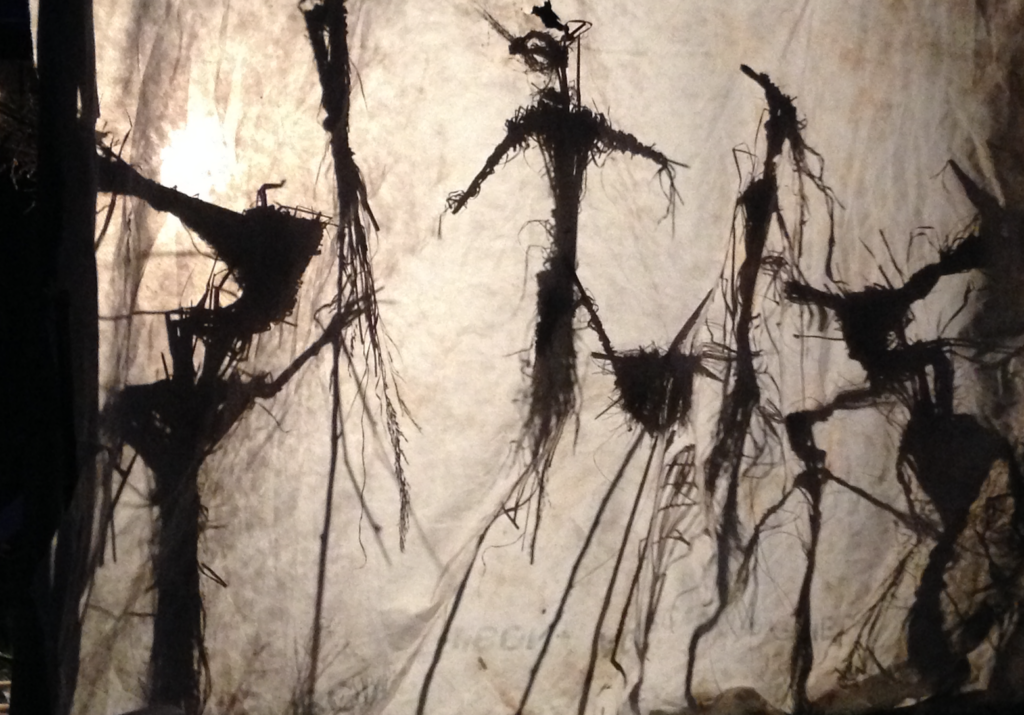 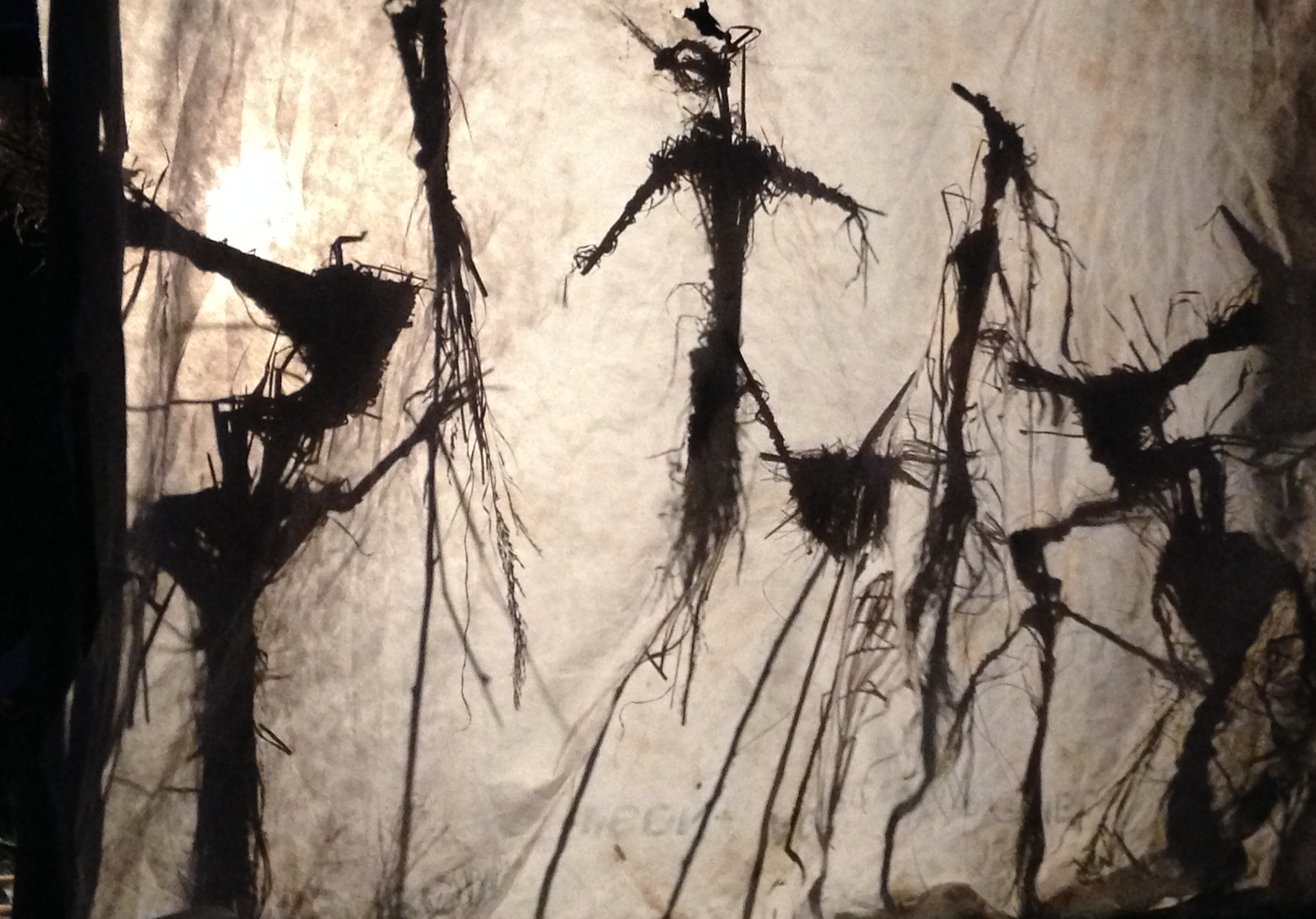 Geoff and I lead a troop of young adventurers down the sand road. We are family friends, unrelated adults, “fun uncles” hoping to inspire wonder in the three young siblings who trail behind. Not so long ago, we all sat right here in the dirt road, patted dirt into a mound over our bare feet, and gently pulled them out to leave little caves. We were building frog houses and learning the difference between toads and frogs.

That was back in spring when we didn’t wear shoes. Now it’s fall in the South, so we wear long pants and crocs. Fall in the South means cool mornings, hot afternoons, and nights perfect for campfires.

Forging on, we jump the sand bank into a thicket of dark skinned cherry laurel trees. Geoff bushwhacks toward an abandoned field full of golden broomstraw grass and silvery dried flowers. He’s the leader today—this is his adventure. He explained his plan and we all bought in. Tonight around the campfire, we’ll put on a puppet show for all the old people. But first, we’re going to make the puppets. Out of grass. That’s why we’re walking through this meadow of dry things that stick to our shirts.

Geoff tells us to look for grass. Not just any grass, though. I break off some broomstraw seed heads, a fluffy cat’s tail of blond curls, and say, ‘Look: this can be a Geoff puppet—see, it’s just like his curly hair!” He smiles, but he’s on a mission. “Y’all said you would listen. So do it right. Look for long, thin grass leaves. Not dry ones. I’ll show you. It’ll be so cool.”

Lily picks a perfect bundle of green fibers. Older Sister Perfect. She directs her two younger brothers, and me, to pay more attention.

Geoff, always one to lead by positive example, says, “Look at that! Lily could weave a blanket with that bundle of perfect grasses!” He ignores my handful of translucent red berries.

Young Wade gets the drift, too. He finds a clump of still-green bullrush and gathers their leaves. But his eye is for art and curves. He coils and braids them; tiny ropes of green poke out of both pockets of his work shirt. This work shirt is serviceable black denim, but for some reason red and yellow chili peppers fly across the fabric through a galaxy of stars and moons. Peppers in Space!

Back at the farm, work shirts and sweatshirts come off. Intrepid Geoff directs grasses to be laid out in long rows on the farm table. A river of grass. He’s particular about grass orientation. Very particular.

I can already tell this is going to be too much detail work for me. Possibly, I think, for middle-child, goal-oriented Reid, too. Reid wants the big picture, but Geoff only lets us in on his plan step by step. “One step at a time, don’t rush ahead,” he says. “Find a bunch all the same length, bundle six or eight and bend them into a loop. Good. Now push the fat ends back through the loop.”

I bail on the weaving and go to hang the big white screen.  But I listen to the conversation. Step by step. Bend, twist, now pull tight! Soon enough, I hear Reid: “Oh cool! Mine is a knight! With a sword! I need to weave him a horse!”

They’ve found an entire world in those bundles of grasses. Geoff took those children down a dirt road, into an abandoned field of stuff that stuck to sweatshirts, through bending and weaving, and now into a fantasy world as deep and dreamy and inspiring as any video game. A world of their own.

Now he leaves them weaving, with instructions to write a story, a play. “At the performance tonight, no one will see the grass puppet, only their shadows. So make each puppet different, identifiable from others. Give the fairy wings, make them big wings. If you make a witch, give her a big hat and a big nose. Stuff like that. Now y’all come up with the story that your puppets will tell.”

After dark, a dozen adults, mostly parents and older single ladies like my Mom, sit in front of the screen in lawn chairs. The screen, soon to be the stage for a shadow puppet show, is a big white sheet stretched on bamboo poles. A golden fire behind it backlights the screen. The audience watches actors and puppets getting ready. We see Tom making campfire popcorn. We see all this in hazy silhouettes on the screen.

To start the show, Geoff says just a few words, then goes behind to shine a spotlight. That makes the youngsters and their puppets come into sharp, black focus on the screen. It’s a magical transformation, like those little framed paper silhouette cutouts, but alive. Their story works. The witch, fairy, knight, all no more than clumps of forlorn grass hours ago, play their roles perfectly. Lily directs. I hear her loud whisper during the show, “Wade, project!” “Reid, bring the knight now!”  And finally, “They all lived happily ever after!”

With “Bravo!” the crowd commands the puppets and the puppeteers to come forward for bows and show and tell. Then the youngsters take seats on the ground as part of the audience and Geoff, the visionary, comes on stage. He wants us to know how he got into grass shadow puppets—it is a specialty art. He tells us of a time as a young man when he befriended and visited, then traveled with nomadic shepherds in the low lying plains of Indonesia. With fire behind him, his story, his narration is mesmerizing. He’s slowly moving back, behind the screen. Now Geoff, the man, is transformed, he’s a tiny figure on the screen, a puppet acting out the story.

We are there. A long time ago. We are herding a flock of ducks—yes, ducks—with a few goats mixed in, and we wander through a rice field with shadow Geoff. We recognize his wildly curling hair (probably made from that broom straw that I picked). He’s walking along a creek bank, a tropical hillside behind, with two other young men. Ducks quack across the screen. All shadows. As the hot sun rises, they wait out the afternoon heat in a field hut, a thatched platform with shade and breeze. Goat and ducks mill around and nap too. To pass the hours of the afternoon, the three men entertain each other with stories, with puppets made from dry grass and green bullrush leaves. Like their grandfather taught them, and like his grandfather taught him, they follow the ancient patterns of the fabric of their society.  These young men tell stories of the ancient puppet world, a world called Wayang Kulit. The name literally means shadows or ghost of grass. The hero battles the Monkey army as shadows fall quietly on the side of the stepped gardens. The moment preserved, retold, teaching Geoff, teaching us, as others have taught for centuries.

It’s all in black and white. But we see spring green, silvery seed heads, blue skies, dark skinned shepherd boys. We hear a water buffalo bellow, taste fresh coconut, and long for a nap in the warm sun. We hold our breath, not wanting to see the havoc a monkey army might bring. We cheer for bravery and heroes. We see the boys’ farmsteads, as they head home at sunset, as summer and the story ends.

We, the audience on this farm start packing up. Charmed, subdued, tired. I’m lost in thought. It’s cold away from the fire, but even so, I feel a warm sadness for the unchangeable and fleeting thoughts of my father who would have loved this evening on the farm he saved from ruin. He loved stories. If only he were here. Then I think of the state of the world and I’m relieved that he’s not. This puppet show, this evening has done what art and stories do, changed my state of mind, my perspective. Tales of knights and heroes, of monkey armies and herds of ducks, have nothing to do with my life.  But tales told by writers, artists or children with grass puppets, these bring us closer to our own trials and our own truths.

We nurse our sense of loss, recognize our impermanence, wonder what will become of us. But then we step back into the present, into the smells of smoke and popcorn and campfire warmth prevails. What defines us is what we do with dried grasses. With ephemeral moments. With the challenges we face. We gather resolve in hard times and laughs in good times. We turn lessons into stories, into puppets, into shadows that recall the trials of our elders and inspire the minds of our youngsters.

Geoff and I stand shoulder to shoulder about to put out the fire. He says, “When I was teaching them to weave the puppets, about halfway through, Wade sort of dismissed me. He said, “Yeah we got that part, your technique and all but we’re doing it our own way now.”

*This story is a memory from years ago. Some details and some characters may be changed and enhanced by memory, time and for the sake of telling a good story.

Posted in Stories About Gardening
← Pandemic Distraction — Wandering In the Nursery Fields on Sunday MorningIs a pot of peculiar bulbs the adult version of sea monkeys? →