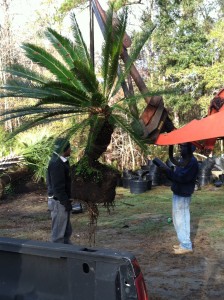 People say I’m not patient.  But here is proof.   Just this week, someone said to me, “oh no, we can’t plant a sago palm, my friend says it will get all brown and ugly in the winter.”

What I didn’t say was, “How many species of Cycads does your friend grow?”   See?  The patience of Job.  Play that Guns’ N Roses’ song.

Then, slowly, methodically, I introduced the idea that there may be more than one ‘sago.’    I introduced  Cycas taitungensis, Emperor Sago, arranged to purchase the biggest ones I could find in the state and got them planted.

I know you can get little ones on e-bay.  But big ones are hard to come by these days.  Robert Chumley,  who I met 25 years ago, and has promoted them and promoted them.  But probably because people just can’t distinguish them from sago, they are still hard to come by.

Here are a few differences:

Emperor Sago (taitungensis)— loves full sun, gets to be a tree, is really cold tolerant, grows twice as fast and has longer, flatter leaves is on the International Union for Conservation in Nature Red List as it only occurs in two locations in the mountains of Taiwan.(Pic of tree form wild plants below; click pic to see source)

King Sago (revoluta) — stunted in full sun, rarely becomes a tree, grows slowly is the most commonly cultivated cycad in the world and though isolated, somewhat common on several Japanese Island.

Both are subject to a new scale pest.   Treating that pest is tough, so for the new Emperor trees I’m putting in, keeping it away is a priority.

Go see it, Go love it. Preservation of Ancient Cypress.
Next Post