I’m not a good breeder.  That requires a forsite and planning that my mind doesn’t do well.  So, my crinum selections are all happenstance and simply noticing something cool that’s happened in the field.   But I am a good gardener and part of being a good gardener is remember connections between plants and people. Sometimes that romantic, sort of looking back wistfully.  Sometimes it’s looking forward.

Here is a picture of a spectacular crinum who’s parentage is most C. bulbispermum.  I got ‘Ashes of Roses’ back in the 1980’s from an excellent plantsman and mentor, Jim Porter.  When I was inducted, into the crinum world, so to speak, it was all about men.  And all about one-upmanship.   Jim and his on again off again buddy had a feud over ‘Ashes of Roses’  Yall don’ t need all the dirt but this buddy, a humble breeder from West Columbia, SC gave me ‘Ashes of Roses’ and told me it was a chance seedling of C. bulbispermum. 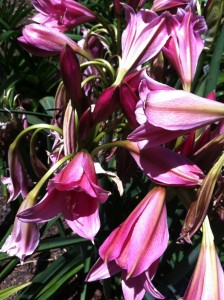 Buzzy Craft did a lot of breeding though.  And based on Riverbanks curator (Andy Cabes) suspicions  I prompted Buzzy again.  In his lilting accent he told me it could have been a hybrid, as Andy suspected.  But, it has been so long ago, he just could recall the parentage.  He still recalled the hurt though, the feud between friends over the name of the plant — inpired by lyrics of a song, Ashes of Roses.