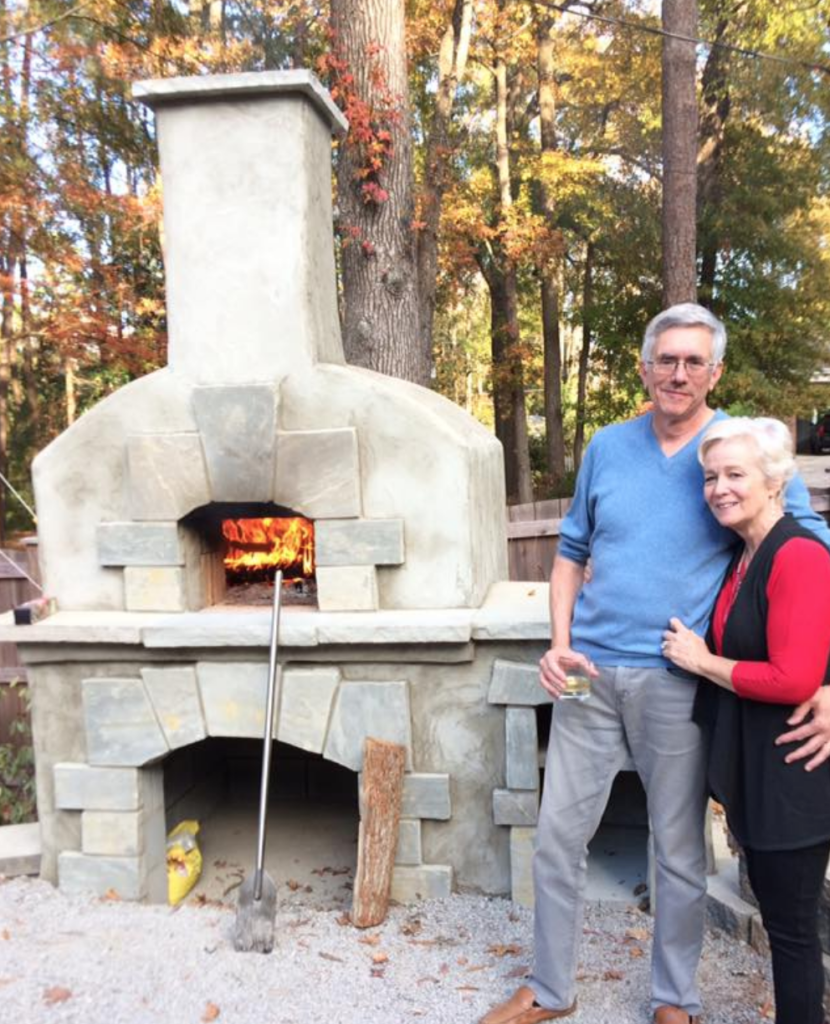 Patrick, the client, turned this garden design upside down. The original plan was for a spiffy lap pool. But Patrick loves to cook and he really wanted an outdoor kitchen; not the kind with stainless steel appliances and an keg-erator. But a real outdoor kitchen complete with a pantry full of fruits and veggies.

We set to work, interns, a builder and an amazing mason and I, turning this bare lot into a cool space. The long, sloping lot now has a lovely design, 4 small terraces, each higher than the next. A sculpture is a focal point on the highest terrace. On the low end a hand-made, wood fired stone oven. And just like inside any house, the kitchen is where everyone hangs out. This oven is the kitchen; it is the place in the garden where friends will gather. But as importantly,  the rest of the space is the pantry to the kitchen.

One terrace is a vegetable terrace, filled now with mustard greens, beets, turnips and kale. Another has small fruit trees and a ground cover of strawberries. Surrounding privacy plantings include a 6 or more fruiting trees, in the walkways, herbs and on trellises ‘novelty’ foods like mube vine and rose petals.

This outdoor social space also has a social agenda of a different kind. It’s a part of making the world a better place.  It’s not just a place to hang out, it becomes almost an informal class room. 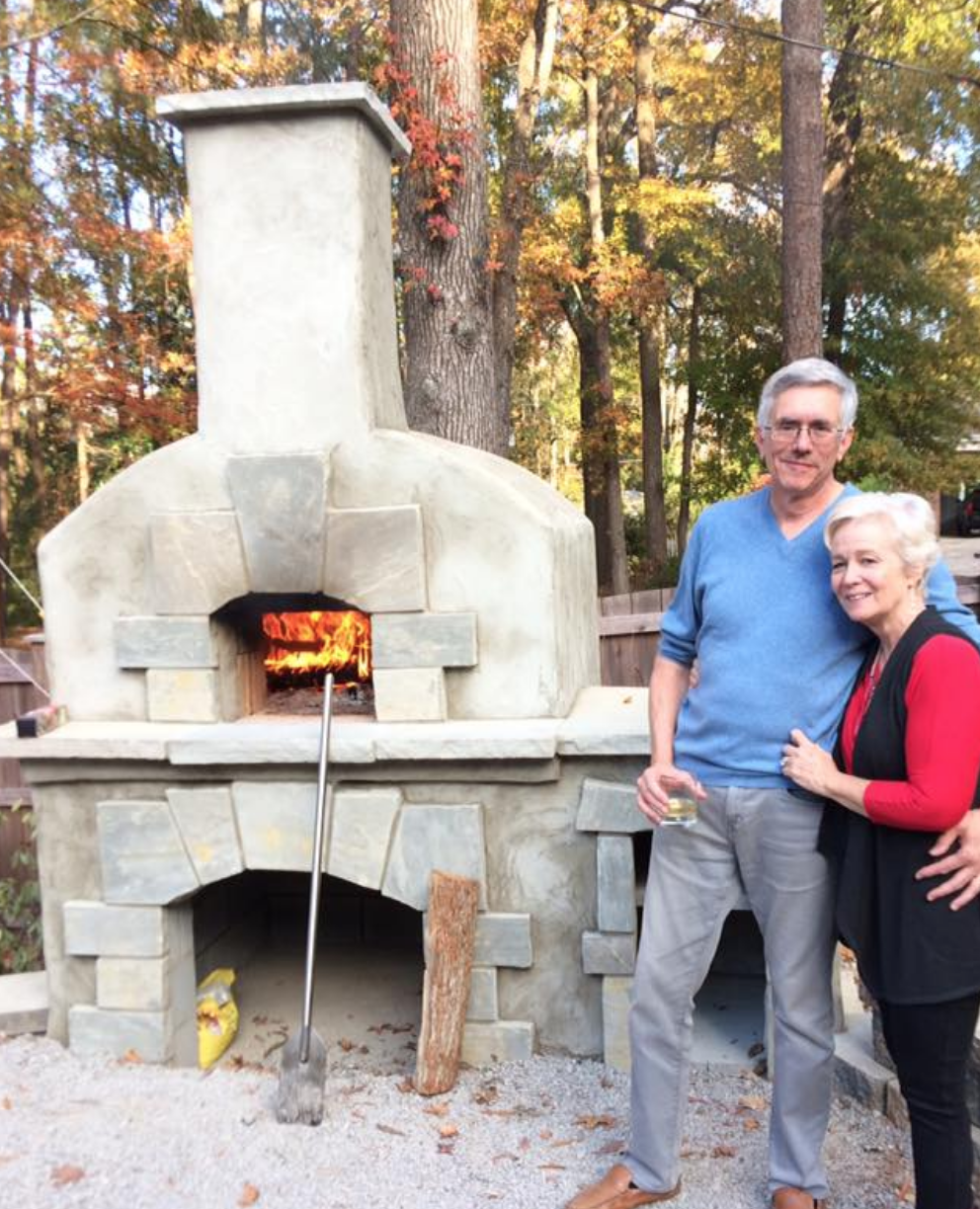 Interns Sam and Gerald, and I spent a lot of time getting the soil right, the place planted and detailed. While we work, we talk. We wonder about what motives clients as well as how they’ll use a space after we leave. Here are some snippets of conversation Gerald and I had while adding some finishing touches this morning.

Jenks Farmer: How much in the way of veggies can Patrick get from this space?

Gerald McIntosh: Almost a full diet, besides wheat flour, meat and stuff. Just from that one terrace that has lettuce, kale, turnips, collards, broccoli, he could feed two people all their veggies. But if he used all that other space, the sides, etc. he can feed more. That is, if he gardens it intensely.

JF: What does intensely mean?

GM: That means planting multiple varieties, tightly. And he’ll pull these, then plant back quickly for summer. Also that he has only tiny walking paths. It’s also intense that he has fruits, so he’s getting the most out of space. He’s probably not even spending two hours or so out there. But he hasn’t had a pest problem yet, that will take more time and close management. Especially in the summer. 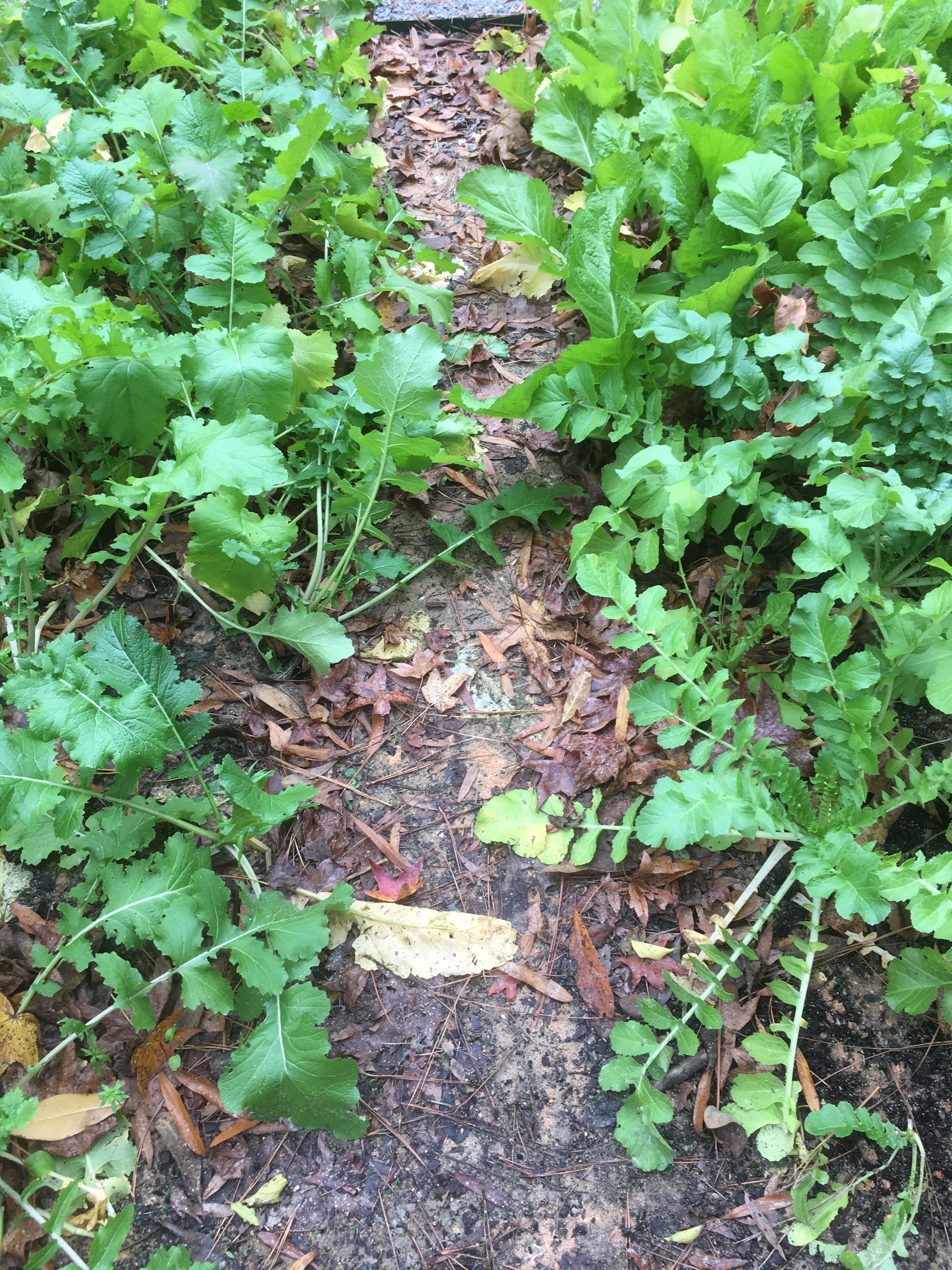 JF: He’s created a sort of food forest, using all the levels of space. The ground layer of veggies, shrub plants and small tree plants and he has vines that he’ll be able to eat from. That’s intense.

JF: I think Patrick is going to enjoy learning the pest and how to handle them. Learning the cycles will be a motivation to him.

GM: And knowing he doesn’t have to go to the grocery store. That just makes life easier and it makes him more self reliant. And he’s not getting food grown in other regions or even other countries. He also has his seasoning, like bay, sage and thyme. That will motivate him since he cooks. 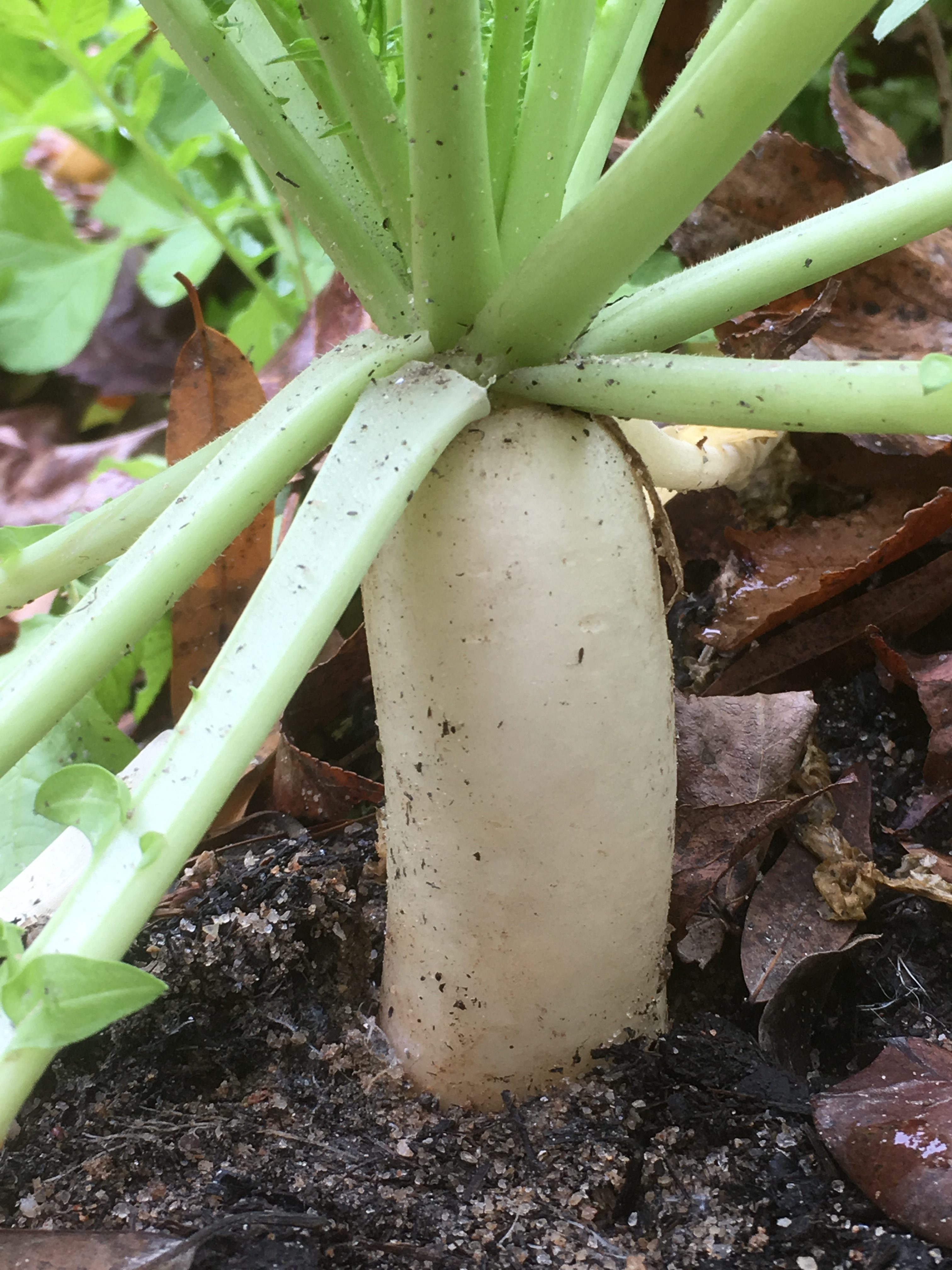 JF: He can also get in the yard, some foods that are tough to find in a regular grocery, like daikon radish.

JF: When you and I grow food, part of the motivation is to reduce our dependence on the grid, the grocery system. It’s kind of a radical action in a way. Do you think Patrick thinks that?

GM: Well it is an entry point for him. He may not be thinking a lot about it. But it is. Even the pizza and bread oven, he’s reducing his dependence on the grid, he used less electricity and especially in the summer when the a/c has to run more to counter an oven baking bread inside. And he can learn to cook all sort of things in that oven.

JF: I think its important for anyone to  get lessons on how to live off the grid, because one day, he may not have a choice — our food system is fragile. So if it crashes, he’s has the knowledge that many people will need. Even if it doesn’t crash totally, this is the best, cheapest way to get organic, fresh veggies.

GM: But this is good for society, this can open other doors for other groups to be introduced to growing their own food. He’s doing a lot by just getting people outside! Lots of people don’t do anything outside.

JF: And he’s not contributing to the waste stream, no plastic grocery bags, no cans, no pool chemicals and such. We could go on forever….

GM: Knowledge is power. He knows that this food is better and being the only person around who can cook a wood fired pizza is a powerful thing too. It’s so much better than a pool, everybody, always wants to eat good food. 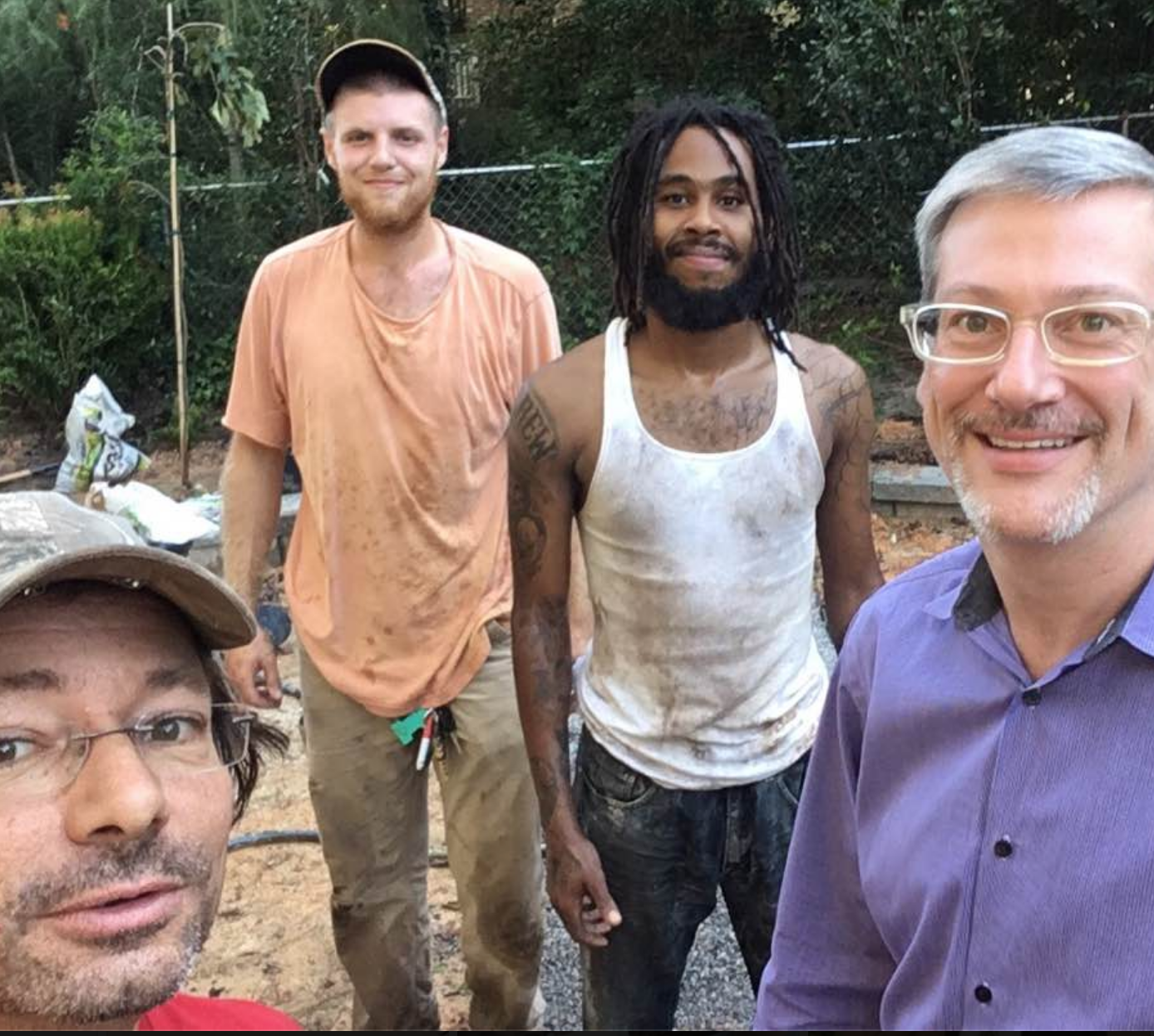 We had a great time making this garden! Thanks to Patrick and his husband Emmett for letting us make a garden with them!