I’ve said two things to people recently that sort of shocked them. 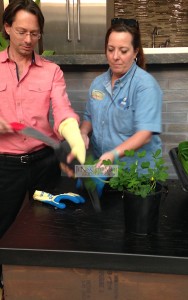 “A garden talk I never thought I’d see at Disney!”, one guy from the audience told me.

First,  “I just don’ t like garden shows.”   I’ve been to them — from Chelsea in England to San Francisco. I’ve even spoken at the Northwest Flower Show years ago. They just don’t turn me on; I’d rather be outside though I do love the flower competitions, the bookshops and nurseries that show up.

The second thing is that I love Orlando and Disney. Yeah, crowds, fantasy and all.  Seems like a contradiction. But they do things right.  I spent 2 days at the EPCOT International Flower Show recently.

Why did I love this Flower Show?

What I loved more than anything was the broad mix of people at this flower show.   In the pictures you’ll see lots of young guys — engaged in gardening.  Where else do you see that?  You’ll also see me, on stage and the very next picture is back stage.  Yeah, that entire kitchen is a big fake set!

Here’s a slide show including my “stage”, a full-fledged kitchen and a pic of that behind the scenes.