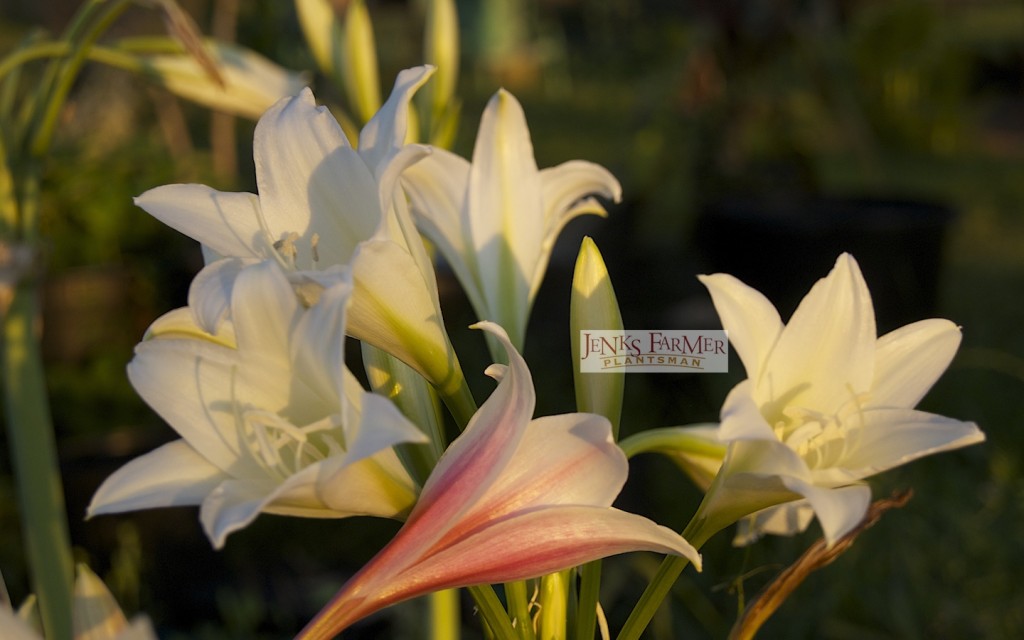 After tons of delicate spring flowers, I’m ready for some bold color and big textures.  Every year, I feel the same. 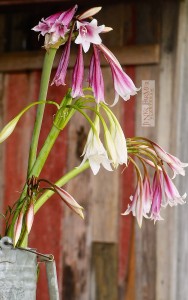 I picked these April 16. We grow the seed strain called Jumbo. It always has big flowers— but color varies white, pink or stripe.

In garden design, I always seek contrasting textures— which is kind of tough in spring since we have lots of new, tiny leaves and delicate flowers.

Crinum bulbispermum is pushing into flower this second week in April here in Zone 8b.  In warmer places — like New Orleans, I saw it in flower weeks ago. In colder places, like Saint Louis or Connecticut, it flowers in mid to late May.

You can make them flower early by finding a warm, protected spot. Andy Cabe, Curator of Riverbanks Botanical Garden says, “I’ve seen C. bulbispermum bloom as late as December and as early as January.”

In cold zones, this is a sure thing. I’ve seen it in Copenhagen, Denmark. Lee Buttala, Bridgewater, Connecticut says, “When I first planted Crinum bulbispermum in my Zone 5/6 garden, I had little hope of it overwintering one season let alone four.  Since then, there has been nothing more satisfying than its flowers in mid-May.  And answering the question of a knowing Zone 5 gardener who asks what I do to overwinter it, I cut back its foliage and leave it alone. They smile too when I pass along one of its giant seeds.

The name comes from the river in southern Africa,  where this plant grows naturally. It’s not orange, nor a water plant. It’s a river’s edge plant. It likes to flood, but it needs to dry out sometimes too. Sometimes, because it will seed itself in ditches, it’s called Ditch Lily. 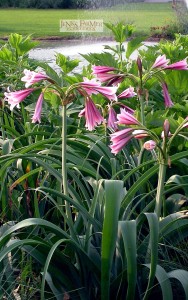 Since this Crinum flowers mostly in the spring, I often plant with hibiscus, chrysanthemum or four o’clock which will grow over the crinum and flower later.

This is the kind of plant we need in gardens, roadsides and even in the those big ugly drainage swails they put beside every new parking lot. It’s a truly sustainable plant.   I still have my very first bulb of Crinum bulbispermum— some one else planted in the 1950’s– that’s right, in the middle of the cold war.

I have pictures of it from 1973.  It still flowers for me today, every year, with very little care, no synthetic fertilizer, never any pesticides and never has lived with an irrigation system. Conservatively, I can say my bulb is over 60 years old and never needed any care from a gardener.

We offer large, baseball sized bulbs of this species.   We also have occasionally, ‘Ashes of Rose’s’  and our own selection named for my Mother Gloria.  It opens khaki-green, fades to light pink then to rich pink so it is called Crinum bulbispermum ‘Aurora Glorialis’.

Here is an older blog on this plant. 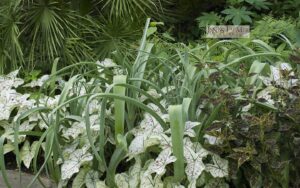 Crinum bulibispermum does most flowering by late summer but leaves are stunning gray and sculptural. 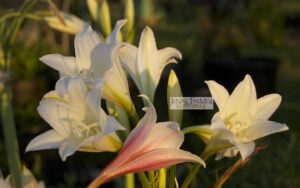 Flowers vary from pure white to pink but most are striped.