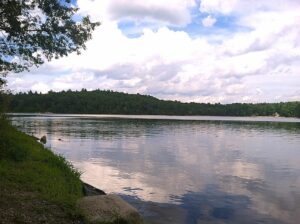 When we were younger, Andy and I bonded over a project inspired by a mule-drawn plow and the death of an old man. An inspiring old man: a visionary, a looking-to-the-future old man who’d used and loved old farm tools. He’d done well, lived well, and raised a family, who had hired us young guys to make an interesting bench to honor his passions.

I sketched and scratched my head and came up with a garden design that included this twenty-foot-long curved bench. The curves forced people to sit and look toward two barns the old man loved. The plow came into play as inspiration for the silhouette of the poured concrete slabs that held cypress slats. Really, it was just an extended, tweaked version of an old-style bus stop bench—concrete uprights, replaceable wooden seat and back.

When craftsmen come together on these projects, they often love the moment, but never see each other again. Quick bonds, easily broken. Things got stronger over years for Andy and me. That’s a tough and rare thing for men. In youth, road trips, ball games, scouts, and military service build bonds easily—the “grand adventures of youth,” as they say. But later, after those innocent times, things get more dicey. Sports, fire departments, daddy things, running? Maybe for some those work, but I don’t have any of them.

Though I’m tempted to butch it up and say that bench project and a series of other similar projects were landscaping or outdoor construction, it would be false to do so. That would be trying to make it all sound “manly”—a ridiculous concept that’s demeaning to the power of design, craftsmanship, and gardening. For Andy and me, gardening projects have built strong bonds. I dream up a space, he builds the cool furniture, and I plant some stuff to settle it all in. Along the way there’s arguing, walking away, ethical discussions, concerns about friends, and pondering our economies and relationships. We’ve been building a friendship while we’re building gardens for rich people.

Mutual respect, admiration for skills one lacks but sees in another spark bonding. There’s an attraction that’s a basis of bonding, too; I call it the eroticism of competence. It’s subtle, can be mesmerizing, and is usually unacknowledged. But you feel it. I feel it, anyway—a warm body rush, a building smile of pride, approval, and release when we get through a complicated or physical part of the job well done.

I’ve no doubt that old man—a retired farmer, pilot, teacher, coach—knew that if you put fellas together to figure out a project, to let them watch and talk and pull on their individual strengths, they’d build important bonds. He might have even hoped that we’d go on to build lots of unique gardens—places where this Southerner’s romantic visions and that New Englander’s practical engineering melded to capture the spirit of a place.

People who can afford to hire guys like us understand that their support of local craftsmen keeps us in business. And keeps creativity flowing, local talent growing, and outside perspectives coming in. I appreciate people like that old man, who had a full life and ended up financially stable. But doing it all seems harder and harder today. So many people are only focused on the financial end of success. As Thoreau said, they “become the tools of their tools.” The quest for maximizing income and growth isn’t sustainable (for people or the planet), and it ignores all the other metrics of a full life.

I’m proud that Andy and I got to bond, that we have great role models to emulate, and that we have taken our friendship beyond the places and projects that make us cash.

Visiting Andy in New England today, we sat submerged in the crystal-clear water of Walden Pond. It wasn’t spiritual or anything, it was just a swim in a place that’s been part of Andy’s world since he was a boy. And a place that has for decades influenced my thinking about what a full and successful life means. The Thoreau discussion was getting a bit deep, till my boyfriend Tom spotted a submarine-sized snapping turtle lumbering along, mouth open, in the clear water. Everybody scrambled.

Philosophy of science or nature? Men leading full lives, singing our songs? Henry David, we work hard to have full lives, as you wanted us to, but at that moment, we’ were just glad to have left Walden with a memory that will bond us, and with all our toes. 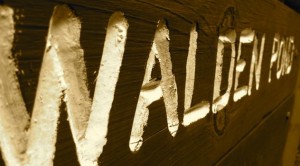