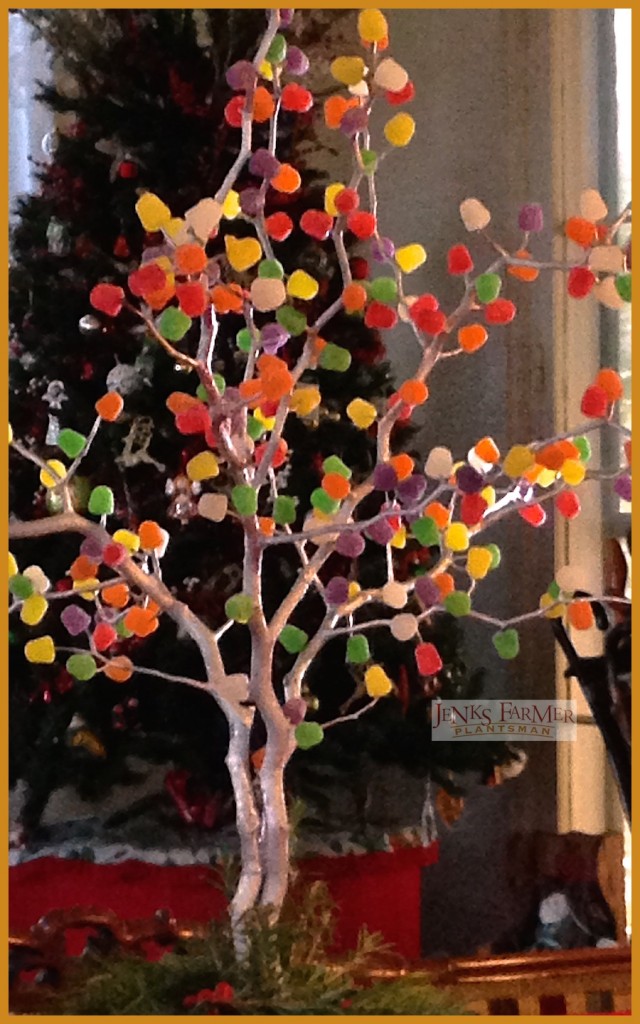 My grandfather cooked.   He set the table with “Old Britain Castles” china; he painted and gardened.  Maybe because the lessons were so constant, from birth on, I don’t recall him teaching me gardening things.  But I know the palmetto tree by the back steps was 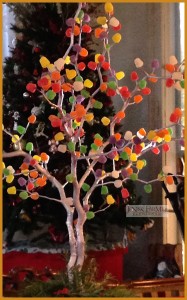 one he dug up on Hunting Island; I know he planted the pomegranate and taught me to save salvia seed in a brown paper bag.   Not one single time do I recall a lesson from him, but there is no question in my mind that he rooted the angel wing cane begonias that lived on the porch for decades.

The gumdrop tree is the same.  It was just there every Christmas.   I never went with him to cut it or paint it or prepare it.   I think it was silver, but my older cousin says white.  None of us remember any details other than the gumdrops on it.   It’s also associated with a tiny warning: beware the thorns.  As I type this, I have a thorn in the tip of my index finger.

Not just any tree can hold enough gumdrops.  What was his tree?  Mayhaw trees grow wild in scrubby places throughout the southern sandhills.  This had to be Grangran’s tree.  They grow like weeds around here and make the perfect gumdrop holder.  Yesterday, I cut a few branches and cleaned them up with pruners to make my gumball trees.  And I painted them silver.  Nothing bought could have made Momma more happy than this simple, joyful decoration.

Mayhaw, May apple,  (in the genus Crataegus)  makes a lovely small tree from the garden.  Our native species (C. aestivalis) grows fast, is completely drought tolerant, and is covered with white cherry like flowers right around March.  Another, Crataegus brachyacantha, flowers a month later.  Both have beautiful, gray gnarly bark. Both are relatively fast growing — I’ve planted lots of small specimens, purchased mail order from Woodlanders — all are now 20 feet tall or so and about that wide.   But there’s even a great container sized dwarf called Riefler’s Dwarf — I grew it for years in a pot and pulled it onto the deck at Thanksgiving, after it had dropped leaves and revealed its tiny rusty orange fruits.