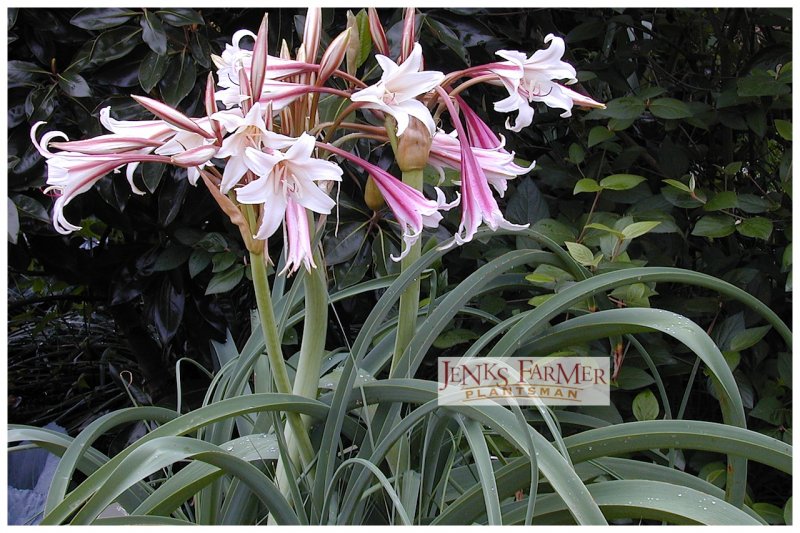 Through recent trials, we know one species of crinum lily thrives in unexpected places like the mid-west, high plains of Denver, in Ohio and New York.  Three foot tall pink or white flowers top sculptural gray leaves. You can see the universal quest for life in its robust growth.  Ironically, the same species has long been associated with death in the south.

In my book, Funky Little Flower Farm, fascinating facts had to be dropped.  My editor did an amazing job helping me understand that sometimes a story conveys a truth better than a bunch of research does.  So for me and for other plant geeks, here’s some of the cool research that’s left out of the essay on this plant.

I’ve found this lily in burial grounds from Lake Charles, Louisiana to Charleston, South Carolina. All lilies have been long associated with death, resilience and return.  Historically in art & poetry, they represent hope, even in death. So lilies have long been used as funeral flowers and cemetery plants. But in the humid south, most true lilies planted in a cemetery slowly fade away. Not so with the long-lived  Crinum bulbispermum — it hangs around old graves for decades, so it became the south’s cemetery lily.

I’ve love that history and searching out cemetery lilies.  But another name for it is more appropriate, the Orange River lily. That name references the bulbs place or origin; the Orange River in Central South Africa. In the dry summers, the river shrinks and the bulb goes dormant in the cracking mud. But with winter rains and floods, pink flowers wave above the muddy brown water of the Orange River. 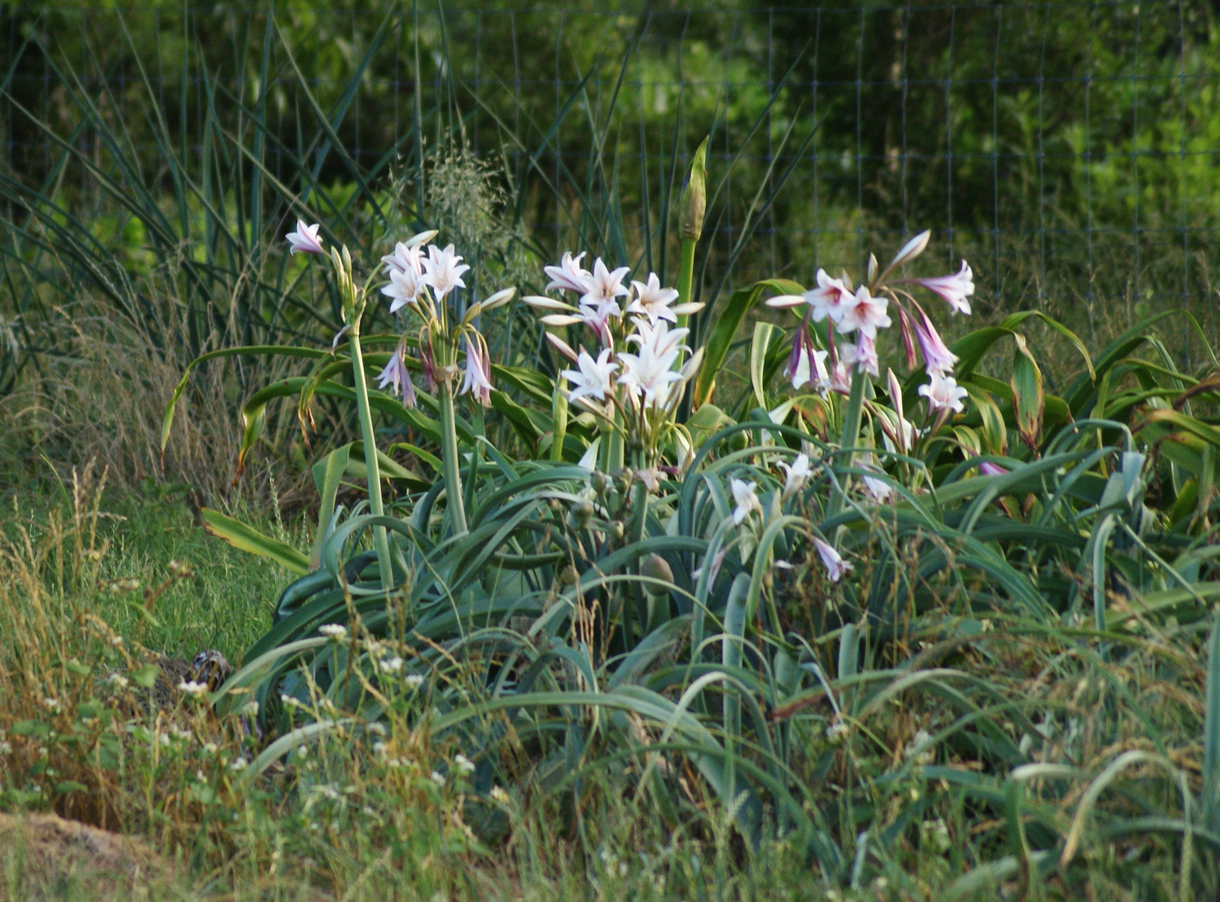 Big flowers sure, but creative use of big, bold, steel gray leaves means you have a spectacular plant from early spring until a few weeks after frost.

I also follow an African tradition — using it for medicinal tea. It’s been used to treat everything from malaria to swelling. The leaves can even be used as a bandage.  This isn’t just folk lore either. New medical research addresses the strong alkaloid, bulbispermine for glioblastoma cancers. (Note, we donated 30 bulbs to New Mexico Institute of Technology for the above research.)

In the garden, this is a long lived perennial when properly placed, in the high, cold plains of Denver, in Indiana, Kansas, Northern Ohio, the hills of Connecticut, it flowers in June and July. But in the South, it flowers in March, then again after summer rains.  When I say long lived, I mean it — my original plant is over 80 years old.  So when you plant a crinum, plant it where you want it to stay, where it won’t get disturbed. A cemetery is good place — but a garden, in the middle of a border of long lived perennials is even better.

Foliage: Granite-gray leaves stand out among other plants. The recurving leaves  make flowing mounds about 3′ tall.  Individual leaves can reach 8 feet, though they curl into themselves.

Ultimate Height: 36 inches, but it sprawls and often reminds me of some sea creature crawling onto shore!

Special Care: No special care when established. Likes good drainage, sun to light shade.  Plant it where it can live for decades.  I have a bulb that is now 80 years old.

Gardening Tips:   Distinctive in foliage and for its huge tropical lily trumpets that contrast and punctuate all the fine textured spring perennials.  Even though it grows near rivers, this is not a bog plant.  It must dry out sometimes.  Incredibly drought tolerant but leaf tips do get crispy in drought.

Suggested Combinations:  Looks great with spring perennials such as Phlox pilosa and spring roses.  Perfect in meadows mixed with grasses.  But I like to stagger the season of interest by planting this with fall interest plants. Try this with sweet grass; the habit is similar but the textures contrast.  Or with antique mums, which flower much later but when the Crinum lily leaves are looking all massive and curved and sculptural.

Sometimes you seed this plant in ditches and cemeteries and such. Often those are small, wimpy flowered forms.  I grow the seed strain that is called Jumbo which has big, beautiful flowers.  I also grow Crinum x bulbispermum ‘Ashes of Roses’ a rose colored selection by my friend Buzzy Craft.  And I have my own selection, Crinum bulbispermum ‘Aurora Glorialis’.