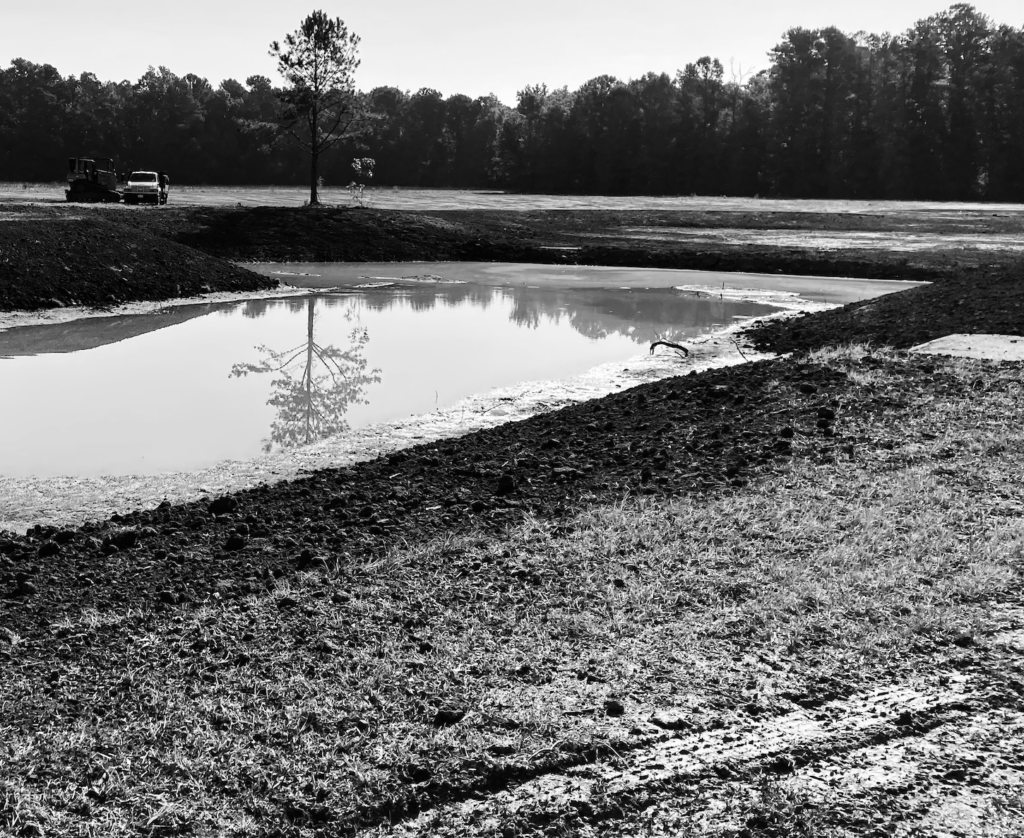 “We’ll plant the cypress grove over here. See? We’ll curve it this way.” I walk along the muddy bank, swinging my arms in a broad curve.

“Yeah, I like that. Blends the cypress pond into the garden. Dad’s cottage will go over there, on the point, where the lake turns east.” Mac looks to see his Daddy’s reaction, then he keeps on talking.

“He’ll have nice morning sun on the porch. But Jenks, the elevation here might be wrong. Squat here, look at the horizon.”

I squat. “I see it. When the earth-moving crew comes back tomorrow, ask them to take this six inches deeper.  That’ll keep the cattails from growing.”

This conversation is muted by soft gray clay walls of an enormous hole that’s soon to flood and then turn into a lake. On this summer Sunday morning, the mustard yellow track hoe sits quiet.  An oily smell wafts over and mixes with sour dirt smell. The earth-moving crew is off. We picked this time to focus. We can talk about elevation, trees, grading, grass, and groves that won’t mature for many years.

The three of us in this hole, three generations of Southern men all squat, side by side, fully focused on the slope of gray mud.

I’m a consultant. The other two have been on this particular spot their entire lives.

Henry, to my right, has a white crew cut covered by a big straw hat. He could easily be my daddy. I’m not surprised when he launches into storytelling mode. “Listen here, now. I don’t know if it’s entirely true or not. Most likely not. But I clearly remember when old Donnie Trudy dynamited his pond, blew a massive hole, knocked hisself out, and woulda’ been smothered by the mud that was raining down on him except for his old donkey Phoebe. Old Phoebe saved him. Stood over his head and saved him from drowning in mud. Every Fourth of July, even New Years’ Eve, anytime there were fireworks. That loyal old donkey’d go crazy if she wasn’t right by his side every time it thundered. For thirty years, come a holiday or storm, old Donnie had to hurry home to keep Phoebe from breaking out and coming to find him.”

Henry was born on this farm about 1945 I’m guessing. I picture him telling the extended version of this story to guests from out of town. Drawing it out. Padding the punch line. Today, it’s funny but it also reminds me that his generation built ponds with dynamite and donkeys. All we’re doing is putting out flags and texting the pond crew.

To my left, his son Mac in a green Augusta National cap has heard these stories before. Mac is not quite as middle age as I am. Mac is all business, making sure we get our work done, and get our plan laid out for the summer. Mac knows who’s gonna drill, shape, plant, seed, weed and when they’re going to do it.  “Old Donnie. Miss him. But Dad, the bulldozer guys are leaving this week, we really have to focus on getting these contours right.” Mac’s great at making sure everybody gets a turn to talk. He listens. Considers. I can tell he’s listening to his pre-teen sons who are somewhere nearby, out of sight, wheeling around in the mud on a farm golf cart.

Dense gray clay banks, soon-to-be lake bottom, swirl around us in perfect, beautiful, big bulldozer size curves. We’re deep enough down, it’s all we see except blue sky and a fringe of emerald green pine treetops. From there, right over our heads,a dozen Mississippi Kites, the same color as the clay fly over.  We’ve already let the story pass and jumped back into planning.

“Heeelp! It’s my turn!  Heeelp me!”  I start a trot up the slop to see what’s wrong. Two boys pushing each other for the driver’s side of the golf cart.  The next generation. The ones who’ll really enjoy the cypress trees and this lake.

“Jenks, don’t worry. They do that all the time. They’re fine.” Without taking a breath he booms to them, “Boys DO NOT go in the wet side. We’re gonna have to fix any tracks you leave.”

Mac knows the tones of their arguments without even looking.

Being down in this hole is like a dream or a moon movie set. It’s disorienting. Mac’s words transport me. I hear his stern, resigned, compassionate Daddy-voice. I hear words from 40 years ago. “DO NOT GO ON THE DIRT ROAD!  In the Magnolia Lane is ok. THAT’S IT. NO FURTHER.” My Daddy’s voice booms over my go-kart motor. Then I hear him say to his brother, “They’re fine. Let’s go look at the cows”

No seat belts, 3-inches off the ground, and we shoot down the lane to skid around each and every massive magnolia tree. In and out. Those little knobby wheels spin and slide on glossy yellow magnolia leaf carpet. I remember that someone told me an old man planted these a hundred years ago so his wife wouldn’t get sunburn. Now they spread over 60-feet wide. A quarter-mile of them. From the field, it’s a huge shell of green. Sky to ground. Make your way inside and its so pre-historic dark that nothing but a bent poison ivy grows.

Daddy helped us bushwhack this path under branches and through the dog fennel patch along the edge of the cornfield. “DO NOT GO IN THE CORN. That’s food. Plus, it’s not our field.”

We buzz it, then round the old cow feed shed and back. Magnolia flowers smell sweet but thick, hard magnolia leaves slapping you in the face on go-kart smell spicy, and warm. Masculine. Corn leaves smell like popcorn when you break them. We clip the edged the field. Pushing the limit. Making the other boy lean in, trying to make his face get slapped with corn leaves. But not breaking the rule. We wouldn’t go in that cornfield for a million dollars.

Corn leaves, popcorn on one side, dog fennel on the other. Tiny sticky dog fennel leaves break off and plaster themselves to your face. Shade, sun, trees, fields, smells all past fast. Memories. Now we’re stopped where we started, two male cousins jostling for the go-kart driver’s seat. Our smell started out this morning with Ivory soap and bleached t-shirts but now we smell of excitement, magnolia spice, and popcorn with a top note of minty fennel.

Nobody’s worried about us. We’re fine. We’ll do this all day, playing under the dense canopy. One of the trees has a crazy horizontal branch bigger round than two skinny boys put together. We walk it. Balancing 20-feet up. We pass each other on it. Straddle it. Then, near the trunk, we find names carved into it. With our pocket knives, we make up a story and carve;

The idea that somebody else will climb way up here and be fooled by our historic hoax thrills us. Black magnolia bark carves easy. You slit the hard black part and peel it to find yellow and slick insides that release a smell like Granddaddy’s vanilla pipe tobacco.

These trees were made for climbing. We climb to 40-feet. 60 feet. Higher. We edge out another horizontal limb, then hang from it to get our bare feet onto a trunk of the next tree. My heart pounds. A magnolia bridge. We hug the trunk to slide down and let out Tarzan yells.  Back at the bottom, eyes locked, we dream of building interconnected forts. “Just like the Swiss Family Robinson!” No adult ever said not to do this. But we know that we pushed the limit. We vow not to tell anyone.

Daddy stowed two sandwiches and two Little Debbie Oatmeal Creme Pies in the go-kart. Lunch break on a limb. That go-kart was exciting for a while, but making up stories, climbing trees, and adventure in the wild won out. A horn blows. Daddy’s Dodge pick-up horn. A deep, low, authoritative, “Come home now.”

We thought exploring dark caves and tall trees meant we were alone. Parents were out of sight and out of mind. Now I understand it didn’t mean that for Daddy. He heard go-kart motors. Yells. And quiet. He interpreted all that even while he worked, read, or walked the pastures.

On this bright day, down deep in the gray hole soon-to-be-lake, I see the other side of the story. The Grandad to my right added plenty of great ideas to the pond conversation. And he told stories. But he has also checked his phone constantly. That surprised me. Unusual for an old guy. I realize he’s tracking the boys. At one point, he taps the phone and a lady’s voice on the speaker says, “Henry, make them come to the house by 11:30. They’re probably filthy and y’all all need to dress for lunch.”

I know this all registered with Mac. He’s still focused, making notes, and texting the earth-moving crew but has never let attention sway from the boys on the cart. I realize I’m even in that mode a little bit. Maybe it’s a boy thing. All of us in this hole know exactly what we’d have been doing if we had been set loose on a farm cart, on a massive mud hole with brand new hills and dips. We’d be testing limits. But no, it’s more. It’s a Daddy thing; love with freedom. Let them be. Tracks in the mud can be fixed. But setting limits. Keeping tabs. Making sure the hard lessons don’t hurt too much. All the while, with amazing Dad attention, he’s putting out flags, and laying out trees, probably imaging that one day these boy’s children will swim, climb and maybe wonder about the old man who told the same stories, over and over,  about building ponds and planting these trees.

Posted in Stories About Gardening
← Moths & Me. Lured In By An Ancient Cycle of Milk & Wine Lily Variation