My donkey and I have been doing this week what men and donkeys have been doing for millennia.  We’ve been planting seeds.  In doing that, we carry on our backs (ok that’s an exaggeration and the pic is set up)  one of the basic freedoms, the truths, rights and pillars of all civilization.  That’s not an exaggeration.  Saving some seed; going off on your own; finding your own bit of land; making your own food for your own family and your own animals is the basis of agricultural society.   It’s at once, the most primal, connected- to- dirt thing you can do AND today, its an almost radical, political act. 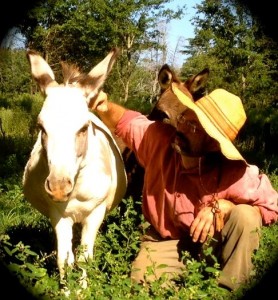 More about that at the close, but first, just do it. Take 15 minutes and plant some seeds.

And take an hour to hang out with me at the local organic gardening store in downtown Columbia.

It’s a great time of year to do both.  You only need a little space, not a farm. In fact, when I leave the farm and head to our little city house, I’ll do the same thing in a 10′ x 10′ plot.   In the city, I miss all those old seed stores like Hinson’s Feed & Seed (which for some reason isn’t listed on ColumbiaClosing.com.)  But luckily  in down towns from Ann Arbor to Walterboro, I’ve seen new takes on these old stores.  In my town, Columbia, finally we have one too.  For the first time in decades someone is selling loose seed for fall planting; no fancy packages, just bags of seeds at reasonable prices  (like enough crimson clover for 100 ft. square cost under $5).   And Mr. Isherwood, proprietor, gives away chats, bs, advice and looks all rugged doing it — just like the seedsmen of the good old days.

On Weds. Oct. 2, about 5;30, join us at his place, Gardener’s Outpost,  for a beer and for fall garden questions and to get some seeds.  Unlike those grough old wrinkly men from the feed and seed, Isherwood can tell you about earth friendly gardening and offer you stuff like Rabbit Manure Tea and spectacular pottery for your porch plants.  It’s just a neighborhood gathering and chance to check out Columbia’s newest most important garden center (they offer only earth friendly, ‘organic’ gardening supplies.(Burger Tavern, next door on  Devine St. will send a waitress if you want a real drink!)

So it’s time to put in seeds of things that give fast rewards.   These things come up fast and easy and will give you something to harvest and bring to Thanksgiving dinner:

White Clover in the Spring

Other things are more slow, some you sow now for winter green cover crops and they add spring flowers too:

Love in a Mist

But back to the politics of planting seed. People ask me what I think about GMO seeds and plants.  I think a lot – too much for this post. If you want serious details, read Seed, Science and Stuggle by Abby Kinchy.  It’s a brief academic book, enthralling but not entertaining.

What I think is most important is that GMO seeds turn our world upside down.   Many people might feel removed from it, but believe this: our society depends on, is built on, is underpinned historically and economically by agriculture.  We are part of it.  We have forever had that right to grow a plant from seed, to fool around with it and make it taste or look better.  That entire system of agriculture is threatened by putting the ownership of seeds in the hands of a few large companies.   You might think, ‘oh they’re only interested in soybeans, corn and canola.’  True, but the way things are going, if their patented corn pollen gets in the air, or on a bee and get’s into your little corn patch, technically, the seed produced from it are not yours to collect.

So you, young farmer, gone off to make your own way on your own patch of dirt, don’t have anything to save for next year.  This isn’t X-Files conspiracy theory.

This is why you need to start some seeds.  You need to know how, and you need to know that you want to retain the right to do it and to be able to pass that and the joy of seed starting down to another generation.  Or, it’s just a way to have some ‘French Bell’ radish for a salad.

(Here’s a great link from Forbes Magazine about why GMO offer too many unknowns to be yet seen as a real solution — especially when tried and true, simple, low-tech gardening methods are underfunded.)

And one more link who’s research is in the book mentioned above.