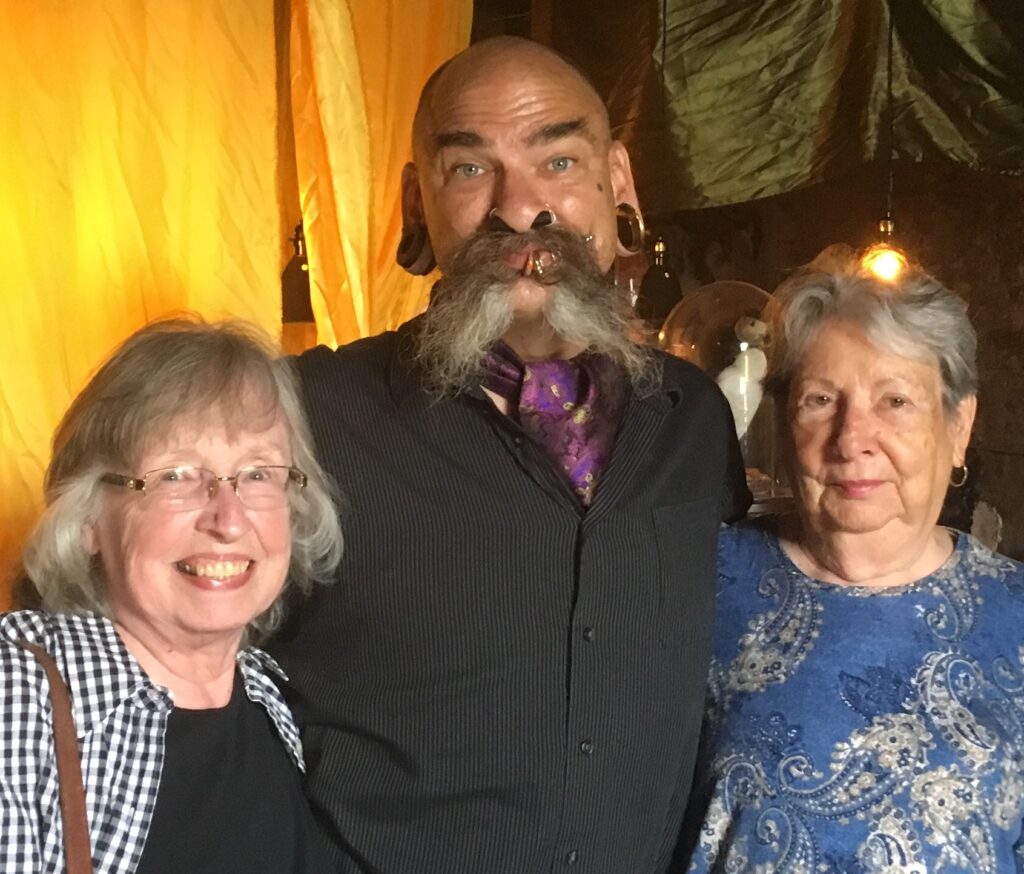 Silver-haired and with a brand new knee, Momma peers into a draped diorama of shrunken heads, leaning in to listen to a much pierced young man, with gauge opening in his ears big enough you could pass a cupcake through, a handlebar mustache, and a Baltimore accent — which is oddly akin to our own.   Earlier today, I helped her do the church flowers for the people not skipping the service. Then we drove out the rutted dirt road toward town. This fella she’s talking to, this place is way off the beaten path of our Sunday route. But I’m secretly proud that curiosity won out and that Momma even wanted to bring a friend on this shop of horrors and gags.

Daddy would not have come here. “No way I’d go in there with that Jack-leg with a bone in his nose!” or “ I sho’-as-hell won’t pay to look at fakes and freaks!” Lowbrow and a rip off he’d of thought. But Daddy died 13 years ago. I’d been away a lot, working on the other side of the state, designing country estates and Charleston hidden gardens; living the high life with rich clients. But a slowly simmering realization solidified with Daddy’s stroke. No matter how glitzy the garden design, how thick the Peninsula Grill’s coconut cake, or how alluring the inner circle of celebrities, this was all illusion.  A life where substance and truth were bent too easily. Gaff. This moment was my call to roots. Back to the shady, tattered farm where the old barn leaned under the weight of massive Chinaberry. Where a massive Banksia vine pulled the chimney away from the house. I needed to step in. And I needed my second chance with the people who’d formed me then sent me off into the world. I resolved to enjoy quiet farm work, family, and Momma at this stage of her life. Especially Momma. Now she would be free to go on little trips, to join the Hydrangea Society, pickle and preserve and host what she calls ‘The Widow’s Club” Tuesday at 10.

I’m doing just that today.  We’re in the only remaining authentic curiosity museum in the country. These 18th-century entertainment palaces (pay-a-dime to see the wonders of the world!) influenced the museums that we revere today. But unlike modern museums, these were places you had to judge for yourself, to discern between true curiosities of the natural world and the imaginations of hoaxers. Tricks. Gaffs.

It’s warm in Pexcho’s American Dime Museum. Un air-conditioned. That’s real. It’s dark. A shaft of sunlight highlights a stuffed egret and P.T. Barnum’s famous Egress, fans billow silky curtains and a dark waxy smell and we’re in a different century of circus and séance. The pierced guide, who does, in fact, have a bone through his nose, blends history and fantastic stories and with wide-eyed wonder. He lets us linger over certain exhibits but keeps the tour moving. Rounding a corner he says,  “In the tall cases over here, I’ll let you in on a secret, these tall case are actually swinging doors into our private collection, but look into the tall cases.  You’ll see that I do have a fascination with babies. There’s a two-headed duckling, a fawn, and this, the youngest pepperoni weasel ever captured in the wilds of Tuscany.”

Momma takes this chance to redirect conversation the things she knows, “Are those your children playing out front? The little girl is so pretty and she ran right up to invite us in.”

He beams, “All four! “Remember I told you I had a fascination with babies? I started collecting these stuffed ones after my wife said no more babies.” On queue, a smiling young daughter joins the tour, slides her arm around her dad, looks up, and says, ‘Did you show them the jar of death?” 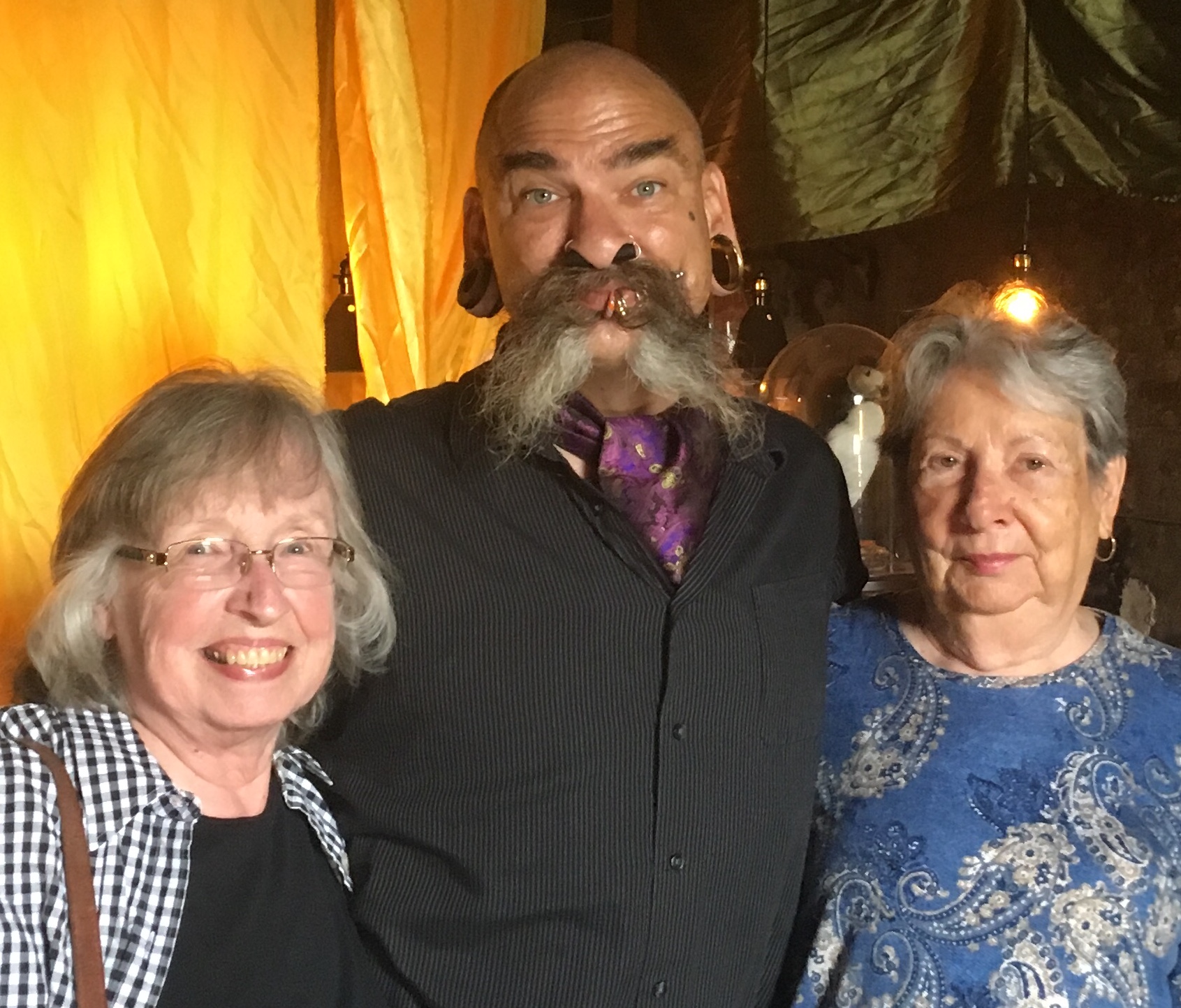 This jaunt was my idea. I was invited to do a reading event at a downtown bookstore. A pre-reading coffee and tour of the new Dime museum would make it more fun. I looked on-line to make sure it wouldn’t freak out Momma. As if. Momma jumped at the chance.   “I’ll ask Bernice”, she said. “You know, she used to be in the circus.”

Wait. No, I did not know that Bernice, a few years Momma’s junior, used to be a dancer, on horses, in Barnum and Bailey’s Greatest Show on Earth.   “Bernice danced on horses? In the circus? Bernice from church?”

Momma’s dialing the phone and still talking to me. “She doesn’t talk about it much.  She had her own train car and everything. You know what? They might want to buy some of her memorabilia. This afternoon, would you stop at the church on your way home and take down the flowers?”

Of course, I will. Sure enough at the end of the dime museum tour, Bernice exchanges numbers with the pierced tour guide, Pexcho himself. I overhear them planning. He’s definitely interested in her memorabilia. He’s coming out to the country to look over her collection. She’ll invite some old circus friends. Mamma offers, “Then y’all come by the farm to see the flowers. I’ll make a pound cake.”

My still wide eyes blur when I step out into Augusta’s afternoon, searing sun. Everything’s hazy. From the concrete over by Luigi’s, heat waves ripple up over carnival colors; a watermelon-red crepe myrtle, a baby blue van, and flames on a sign for Vegas Show Girls.  Sizzling.  Is this swooning?  I take a minute to adjust.  What’s real here? Momma and Bernice, pocketbooks on their arms help each other toward the car. Sho-as-hell, I am thrilled that I’m not gonna miss this show.