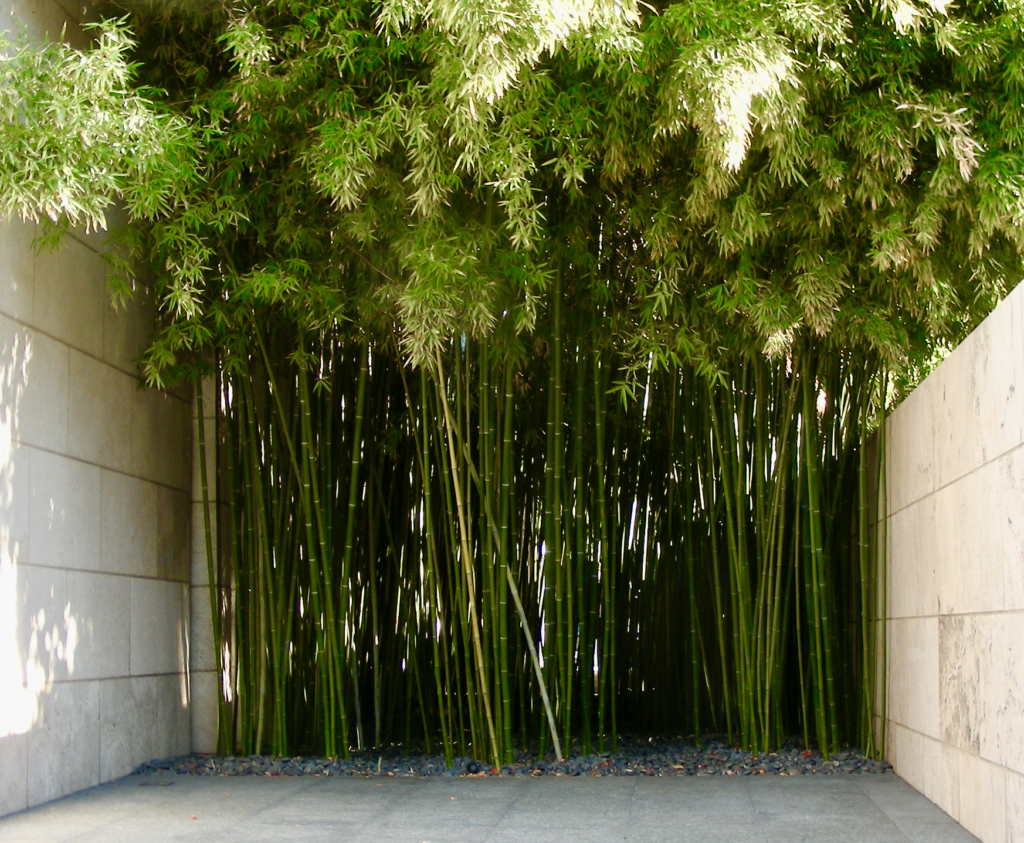 25 years ago, the real estate agents didn’t like it. “Too cheap.” They said, “You can afford more.” “Iffy neighborhood,” they said, “Two young gay guys, y’all should be looking in the happening parts of town.” Ultimately, we got the professionals to understand what we wanted, what we didn’t want — to spend every dime on a house. We liked the next-door neighbors and the run-down area. We got a loan, got a dog, and started a life working on an old house.
One immediate problem could have been fixed with an expensive brick wall. The problem was this; from the shower inside our bathroom, yes only one tiny bathroom, you could look straight through the galley kitchen, out a window, and into the neighbor’s shower. Though none of us were too modest, we wanted privacy. The expected, expensive brick wall wasn’t our solution. We decided on a privacy planting.

We laid a brick patio, leaving 2 feet of space between the edge and the chain link fence which separated us from the neighbor. Right up on the fence, I planted a line of clumping bamboo from 3-gallon pots. I mixed in one Cestrum and one variegated potato vine. Those two plants would interweave and add flowers to the tightly sheared bamboo hedge. 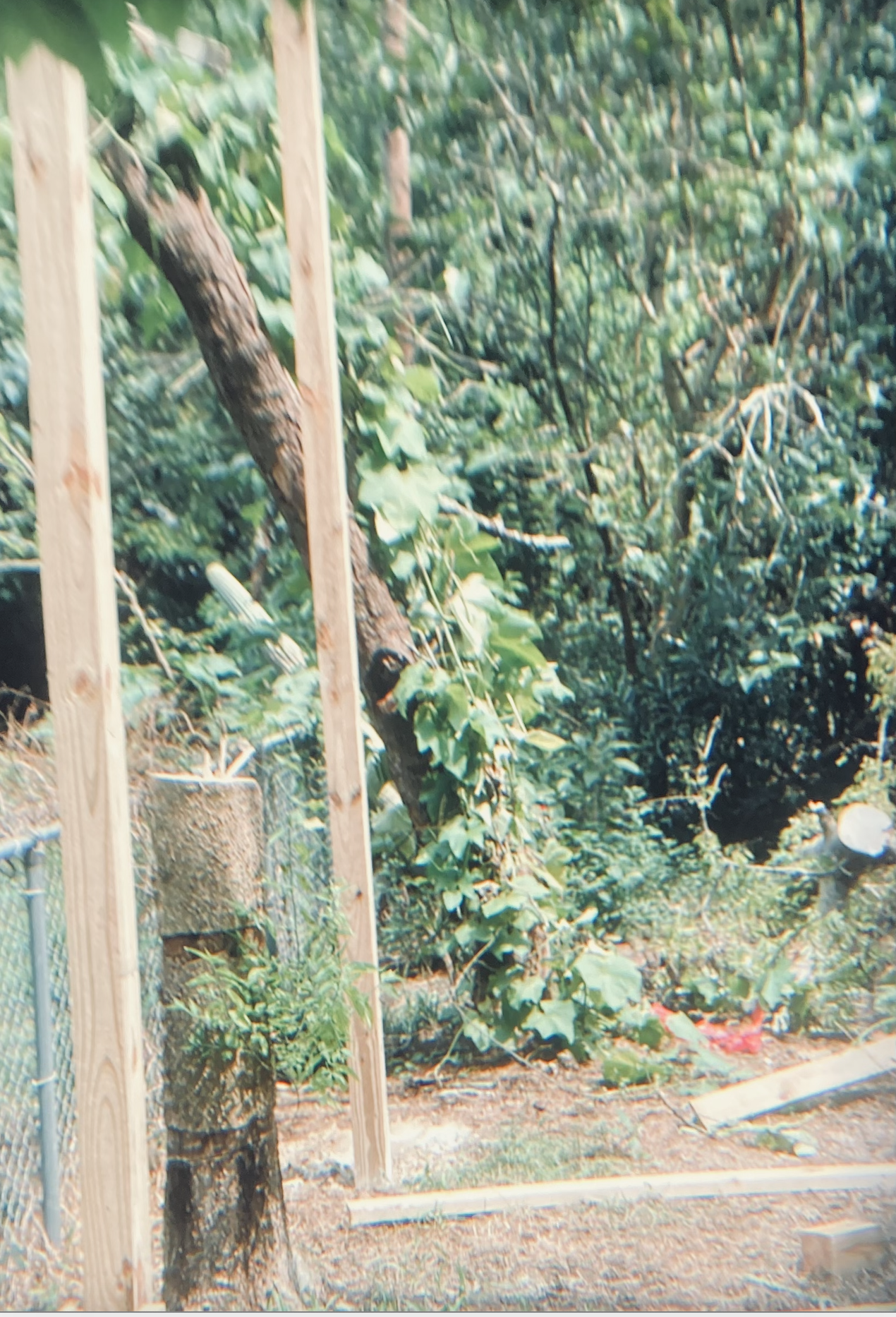 Installing the post for the bamboo support. Notice the distance between chain link and support. That is the narrow space the bamboo has grown for 25 years.

To help with the pruning, we also built a frame using three tall 4 ‘x 4’ posts connected at the bottom and top with 2 x 4’s. It’s about 12 feet tall. That top wooden rail would eventually be my pruning guide — something to rest the tip of the extension pruning shears on. The wooden structure and the chain link fence help hold the bamboo upright. Bamboo tends to bend outward if unsupported.
Plants, wood, screws and all cost about 200 dollars back then. That’s a fraction of what a wall would cost. We had to wait of course. But even in our Columbia sand, with no irrigation, within 2 years we had a living screen.
Plant lovers don’t stop. At one end, I added a windmill palm and a fast-growing evergreen tree, (Pittosporum heterophyllum). It’s a sprawling small tree with elegant tiny, leaves and a million fragrant flowers in April. The palm and the tree were also in a 3-gallon pot. Both reached head-high in 4 years. The green curtain became the backdrop for many happy hour grill-outs and late-night hangouts. And more than one friend and occasional strangers slept on the patio.
Over the past 25 years, I’ve never lived alone in this house. Not once. By renting out the extra bedroom, we paid down the mortgage. Nor have I ever gardened alone. Various partners, plenty of renters, and a good many regular couch surfers have been part of this garden team. Jennifer planted the back hedge in trade for rent. James laid the brick border. He’d do a little at a time, every summer, when he was home from college in China. Hunter loved to haul brush to the street.

All the current residents came outside to garden on this sunny February day. My husband Tom and I live upstairs, our friend Bob and Gus live downstairs. Tom can never remember Gus’s name, but aptly calls him “the old man in a poodle suit.” A little rescue dog, Gus fit right into our household, like us he’s often covered with leaves and debris. Gus doesn’t garden but ruts around looking for a lost hamburger bun or spilled beer spot to lick. Then he grunts, coughs, and finds a spot to nap in the sun. 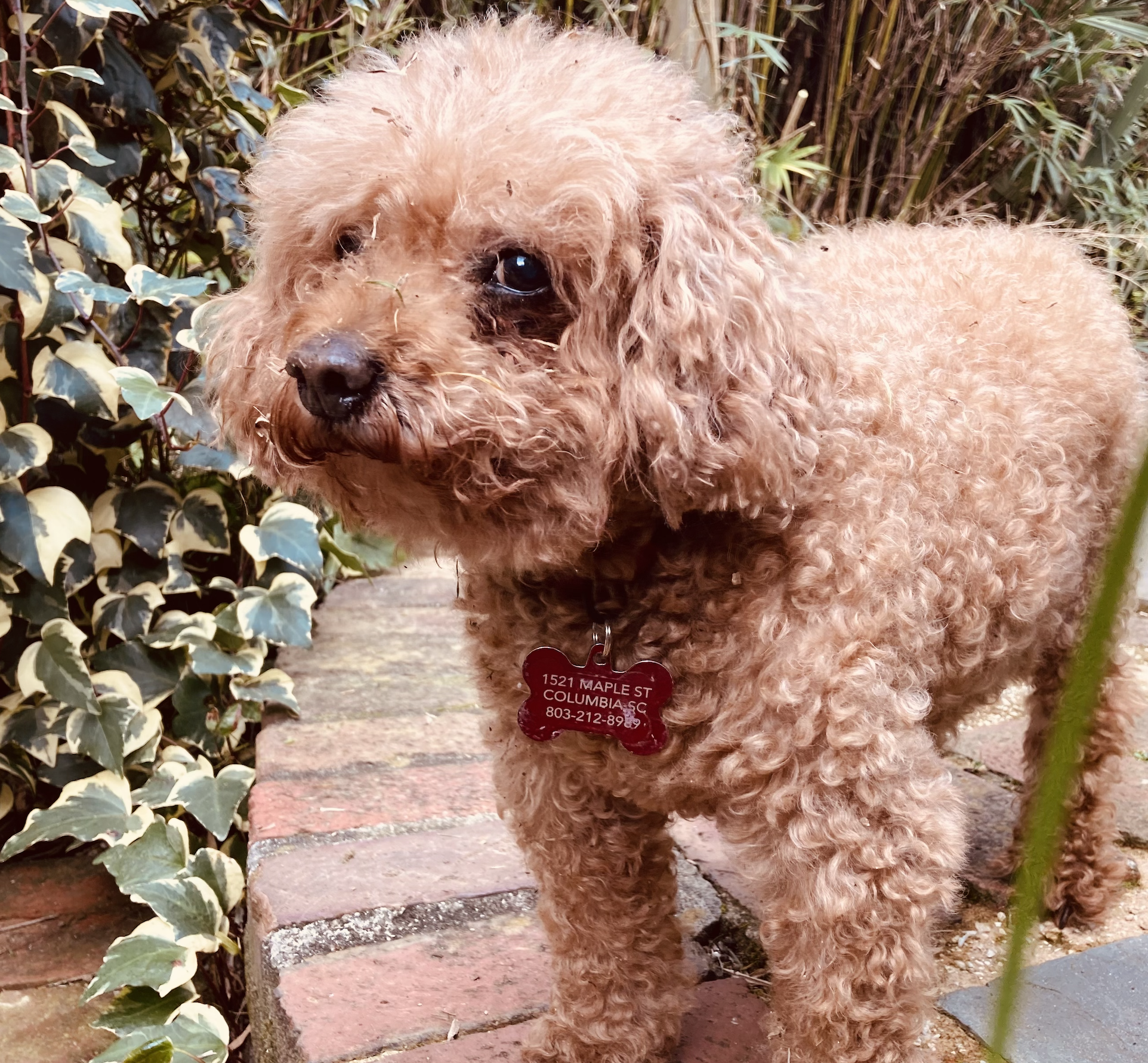 The Old Man in a Poodle Suit

Today the privacy screen needs some serious work. This is renovation pruning. I reduced its height by a good three feet. I cut the big canes that poked out of the frame. We thinned and pulled dead and gave it all a shear. After clean up, the bamboo looks thin. For the first time in decades, we can make out the neighbor’s bathroom window. But this summer, two sorts of growth will flush out. First, tiny leaves from existing canes will fill in. Later, big new canes from the clump, emerge from the ground. Since we’ve cleaned up, I’ll be able to shear easily again.
I sheer about twice a summer. If you like things tidy, you might do it more. Or you could spray a growth hormone to slow the bamboo. Given the minimal planting cost and easy work, I’d say this bamboo hedge has been a success.
A few times a year, a visitor walks onto the patio and exclaims, ‘Wow, you planted the bamboo? You’ll regret that. It’s gonna take over the world.” They just don’t know. Yet. I’m gonna offer them a beer then preach. Clumping bamboo species do not run. Ever. Biology dictates that they grow upward. Not out. Any professional plant science person can confirm. Even a few minutes on a reliable website will tell you that too.

However. people make mistakes. It’s possible that you thought you bought a clumping bamboo, got it in the ground, and two years later it ran. You got taken. Nurseries make labeling mistakes. Some folks just don’t care about botanical accuracy. The truth is that there are 1,000 species of bamboo on this earth. We even had a native bamboo – ever heard of a canebrake rattler? That snake gets its name from that native running bamboo. (Pre-historic pandas in what’s now Tennesee, ate this cane too*) When young, American or Chinese, clumping or running; most of them look pretty much the same. The big lesson is don’t listen to fear mongers, and don’t buy bamboo at a box store or on ebay. Get it from a professional. 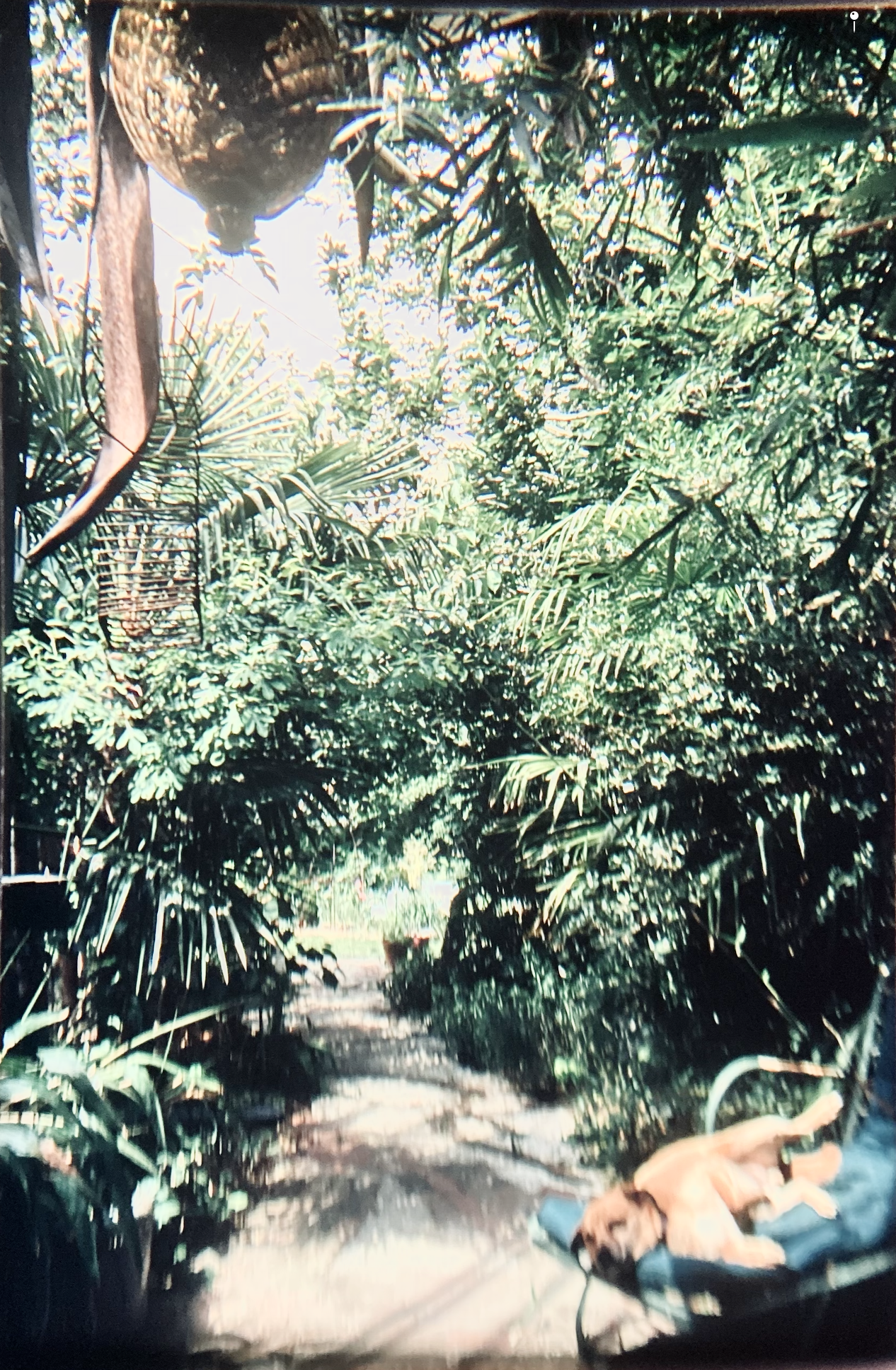 After five years, the bamboo shaded the patio. Notice at top, the bamboo arching out. This was a year we didn’t prune enough.

Even professionals make mistakes though. In retrospect, instead of using the species, Bambusa multiplex, I should have used a smaller cultivar like Bambusa ‘Golden Goddess’. That would have made my pruning job easier over the years. And that Cestrum that I planted for summer flowers? It reaches out too far for light. Its limbs always poke out too far. And even in this unirrigated crowded bamboo grove, it just won’t die. I hate it. The potato vine has been a joy, sporting tiny white flowers all winter and spring, and blue fruits in summer. But the variegated one I planted, dreamed of, reverted to green. That’s ok. It’s really about the flowers.

I bought the cheap house on the out-of-fashion street, filled it with people, dogs, and plants. Even though these days, I’m out in the country or on the road a good bit, this city garden still centers. The iffy neighborhood has come into its own. The bamboo grown. A little advice to new homeowners; do things right for you — for your budget, taste, and lifestyle. Don’t let pressure and popular styles dictate. Creative solutions bring more fun, more joy. Carrying them out is what life’s all about.  Plant more bamboo. 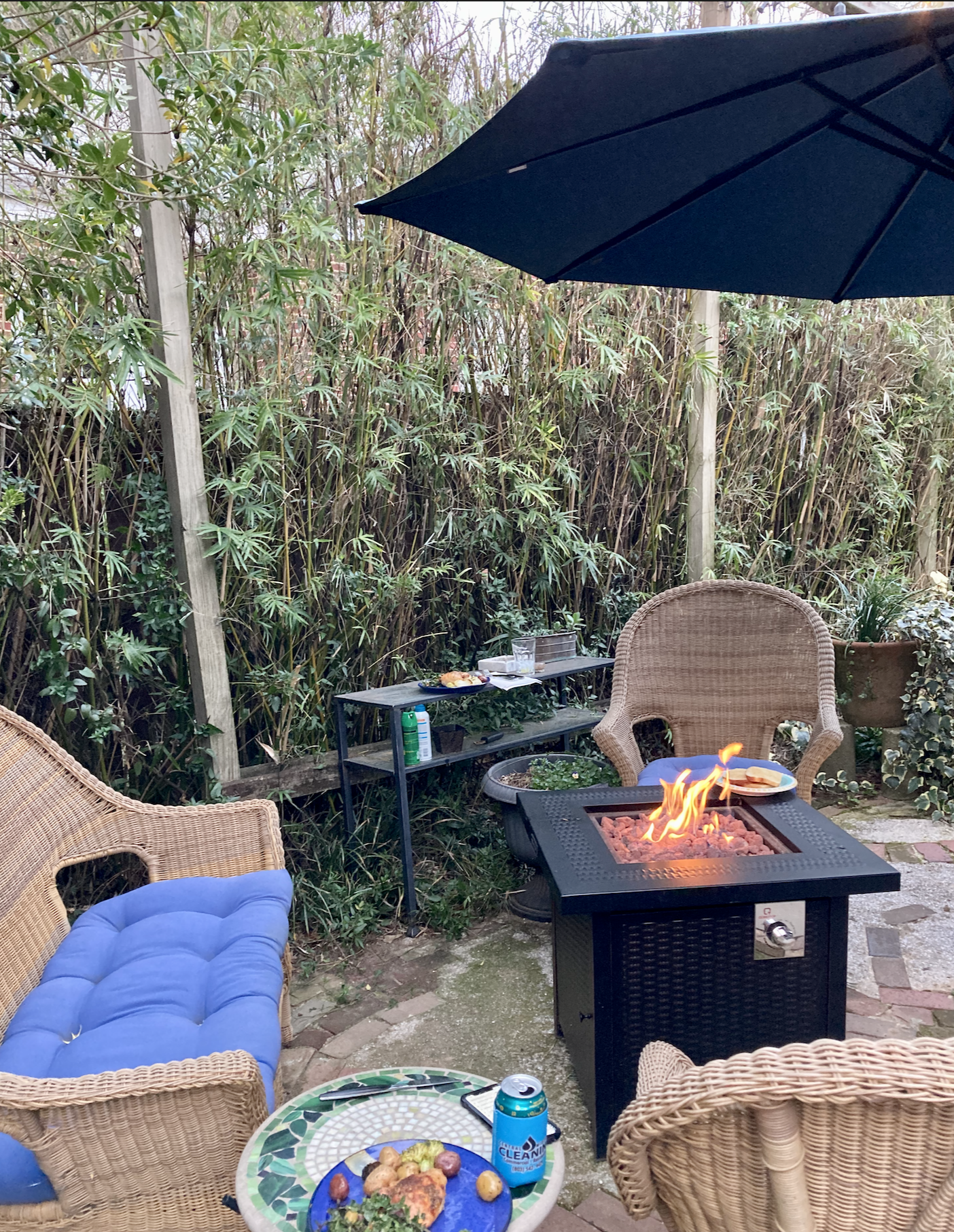 After a serious, regenerative pruning, the bamboo looks thin. But by May, it will start to fill out. 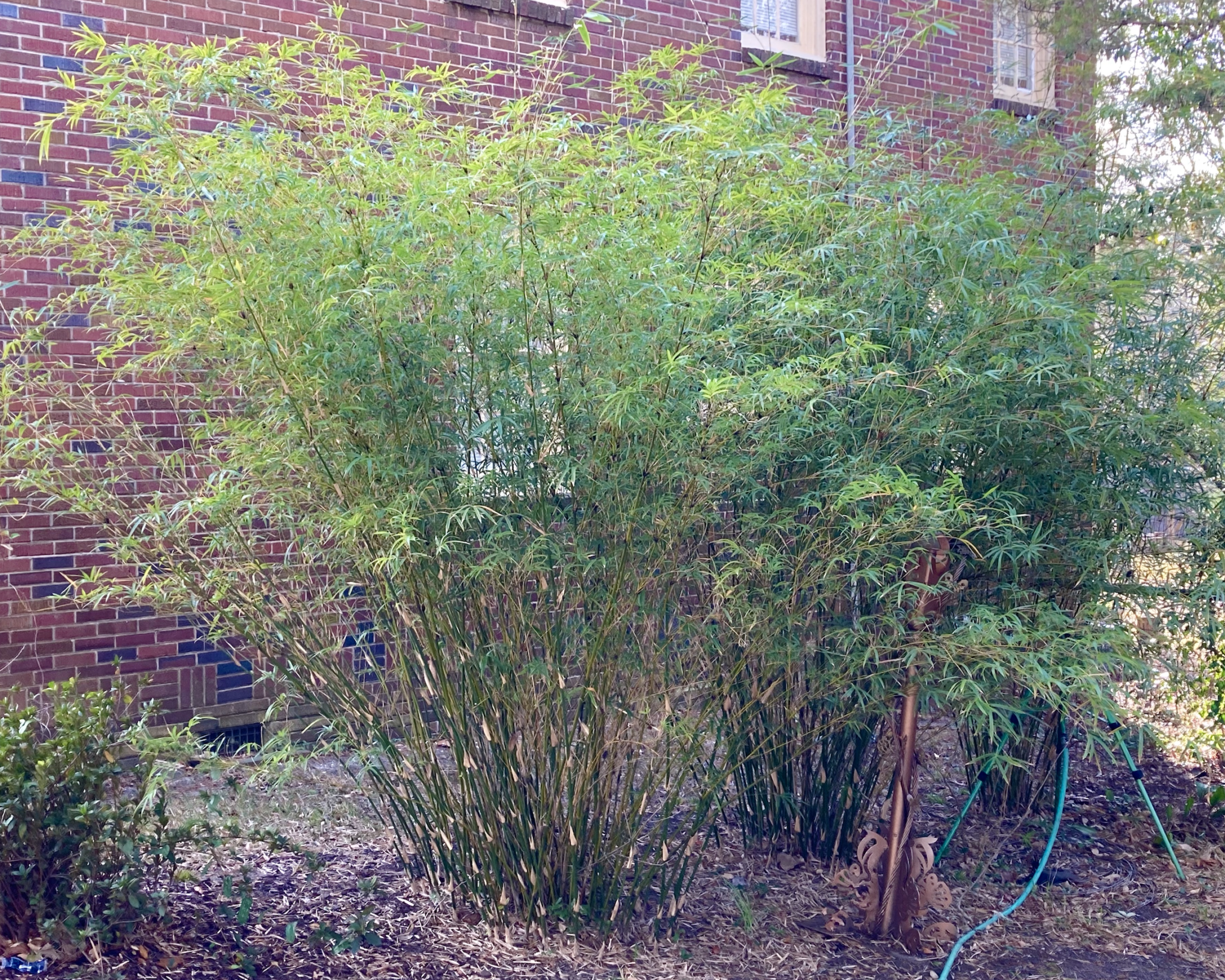 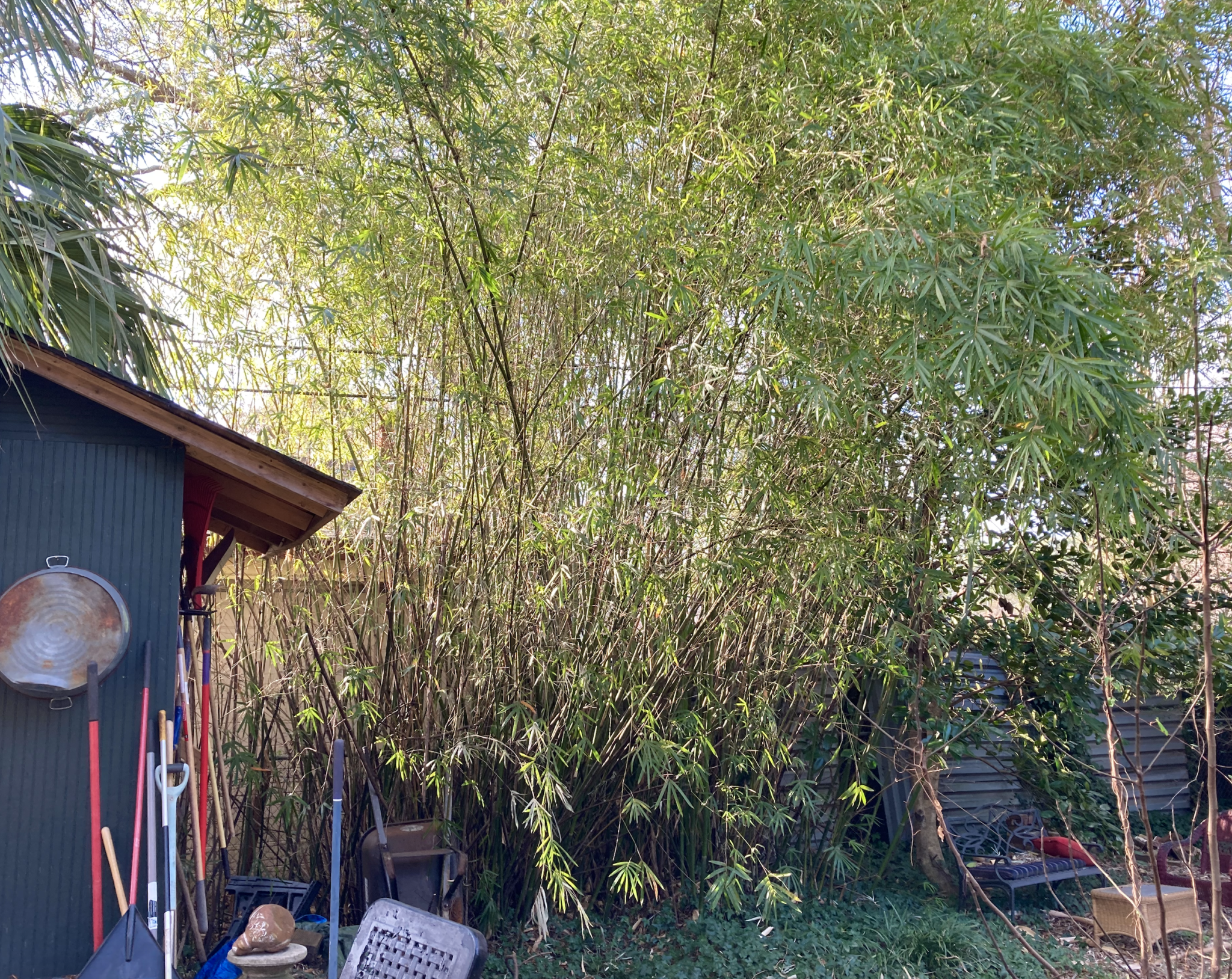