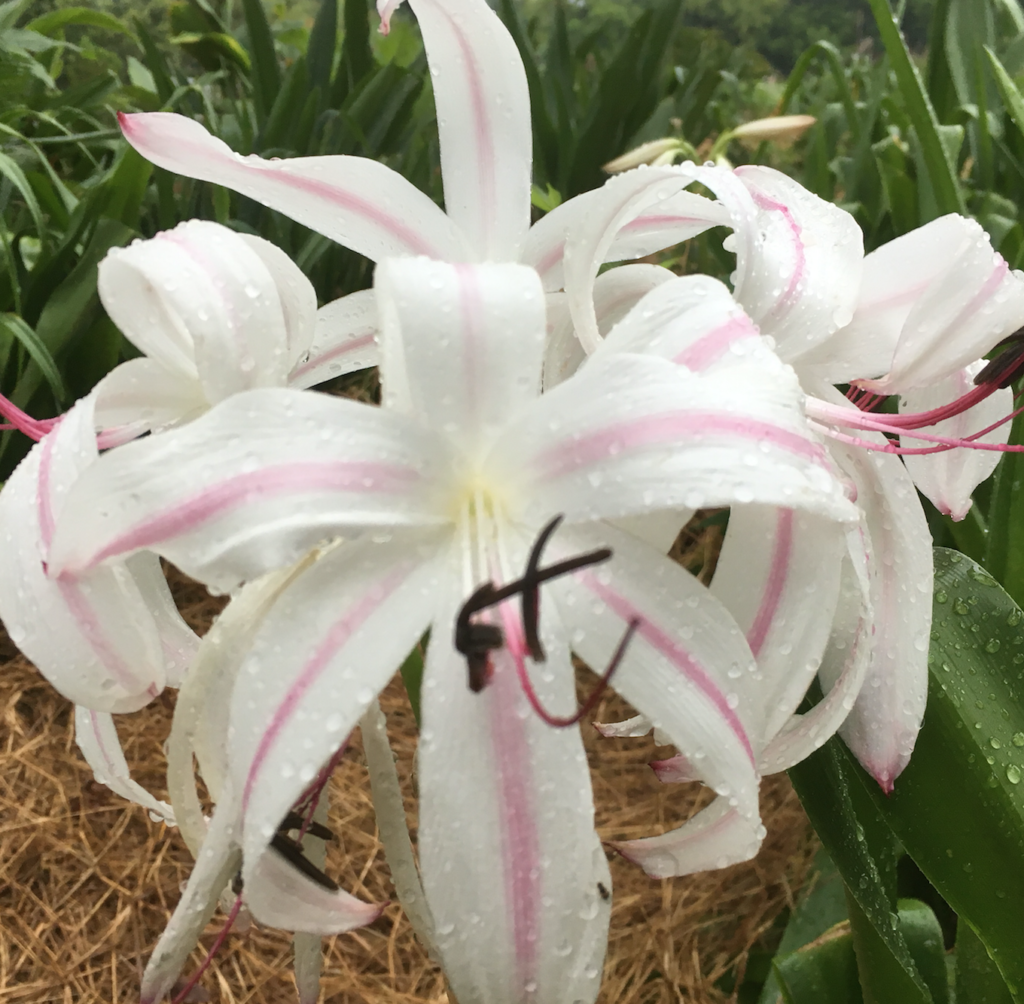 Victorian Britain was the epicenter of fashion, trends, politics, and horticulture.  Natural history and plants were serious studies, serious hobbies for the rich. Sailors, explorers, and traders brought plants from all over the world to tempt rich collectors. An abundant supply of coal meant hot-houses and conservatories allowed for tropical plant gardening. Those collectors who could indulge in the lifestyle we see on Downton Abbey, needed a huge staff to keep it all going — inside, outside, and under glass. This image is shared from a lovely stamp collection website, LadyCarnavon.com

The set of Downton Abbey is the real-life Highclere Castle (which is open for visitors) in a naturalistic setting. It’s sometimes tough to see in a mature landscape that looks so natural,  but important to remember, that all those meadow and woods, the curving paths and roads were part of a garden and farm master plan which was created by the plantsman, the trendsetter, the oddly named man, Capability Brown.

And it took a crew of gardeners and foresters to plant, install and maintain it. For five generations one family was part of that crew — they had the lovely, appropriate last name of Digweed.

Remember the Downton Abbey flower show episode in which the valet, Mr. Mosely’s father grows better roses than Lady Grantham’s gardener?  But who gets the prize for the best roses? Lady Grantham of course.  As a servant, his roses can’t win. He may have been a great gardener but our horticulture literature mostly preserves stories about the upper class.  No one wrote about Mr. Digweed either.  But I did find one reference in an 1837 (Amaryllidaceae by William Herbert) that references Mr. Digweed raised, “in the stove (hothouse) at Highclere” a crinum which was, by 1837, named for him; Crinum x digweedii.  (Note, Mr. Digweed’s grandsons found this post. One runs a gardening company in England today. Here’a  link) 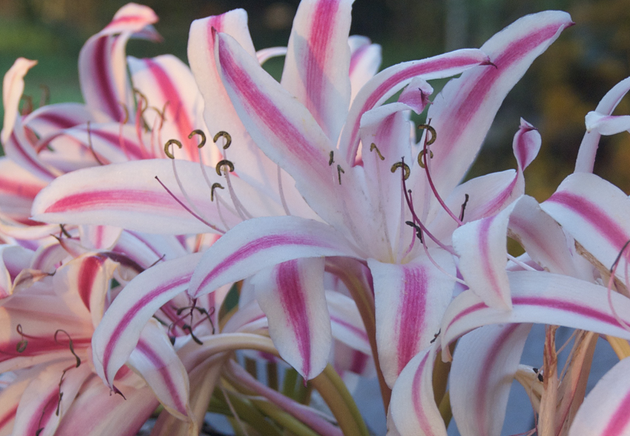 That crinum was a hybrid. The two parents came from different corners of the globe — without British enthusiasm for plants, without explorers and sailors and coal and glasshouses and ships, a South Carolina native crinum could have never been crossed with a South African crinum. Mr. Digweed did more than raise one crinum in one greenhouse though.  His new hybrid set seeds and spurred an entirely new class of crinum.

In cold climates, these plants were grown in pots, protected inside. But when they made their way back to America, their native roots dug in. For us in coastal South Carolina, the digweedii’s thrive in the ground.  Deep red stripes, open flowers and running, vigorous plants captured people’s attention.  Soon enough, gardeners across the South started making new hybrids and selections which all are part of the Crinum x digweedii group.  Today you’ll see  ‘Stars and Stripes’, ‘Red Flare’, ‘Royal White’ and ‘Marisco’  for sale. But there are countless others, many without real names.  We’ve made our own selection simply called “Walterboro”. It and many others really are not too different from their sisters.

The digweedii’s flowers arrive with August heat. In our fields, six slightly different forms flower through August and September. From collectors standpoint, it can be fun to compare petal width and color intensity. But as a professional garden designer, I have to admit that for most people, in most landscapes, they all look the same. So I often interplant them and don’t worry about the names. Like all those pale, whiney Crowleys of Downton Abby, I get them mixed up; it best to just sit back and enjoy the rich colors and the drama.

These digweedii’s need a lot of space to spread. They love a wet spot like a ditch, a leaking a/c, or even a marsh. Unlike some bulbs, they spread rapidly, making a great groundcover or erosion control. Mix them into a wet meadow with sweetgrass or the edge of a pond for erosion control. They’ll even grow in standing water like their parent, Crinum americanum.

The deep red stripe adds drama to the late summer garden. Mr. Digweed may not be in the history books or on Downton Abbey but his red striped runner has spread far and wide, taking his name with it.  And when people comment on the flower in my garden, then I get to tell the story and honor Mr. Digweed. 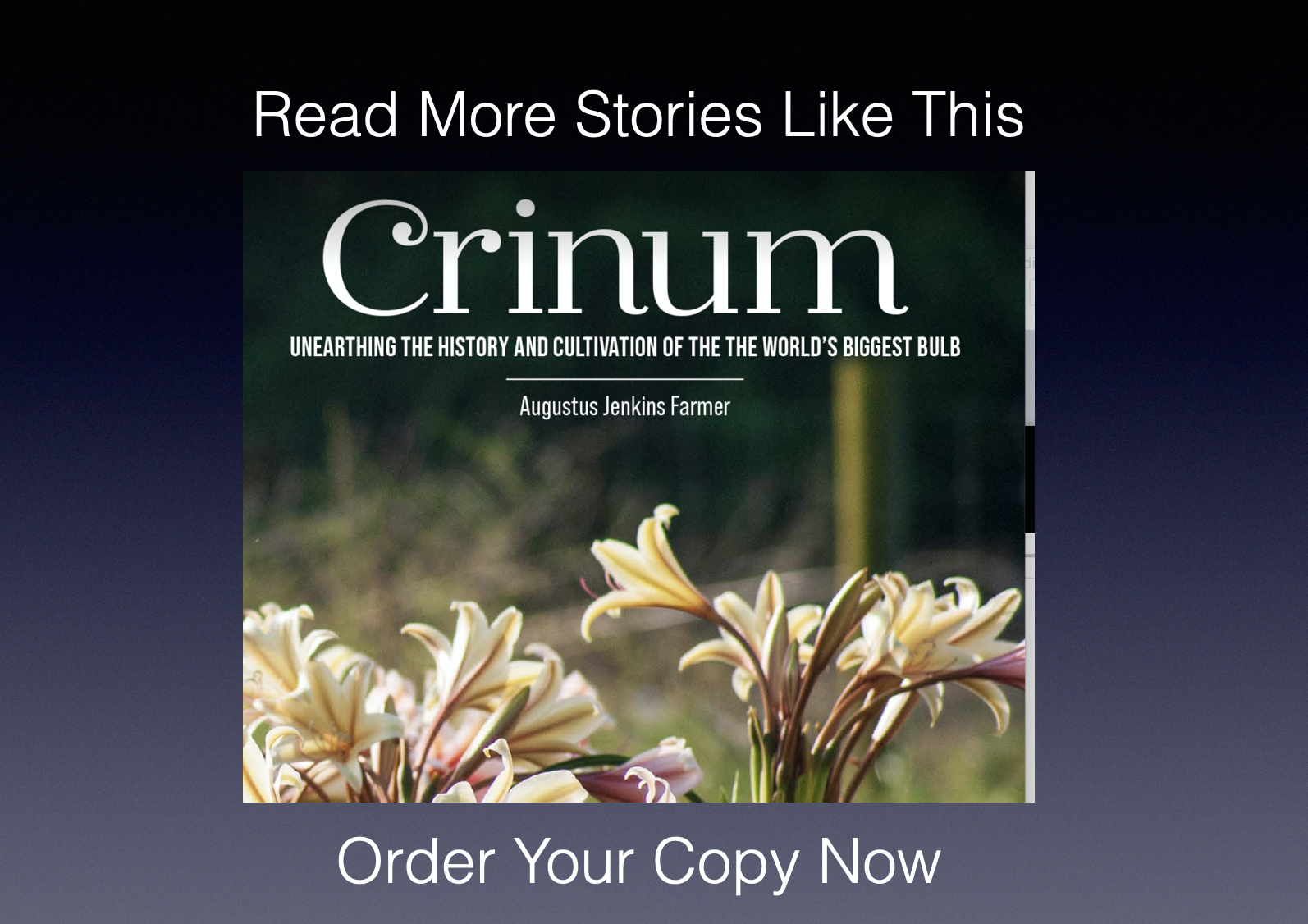 Click Above to Order Signed Copies from Our Web-store.  Or Get Paper Or Kindle on Amazon.